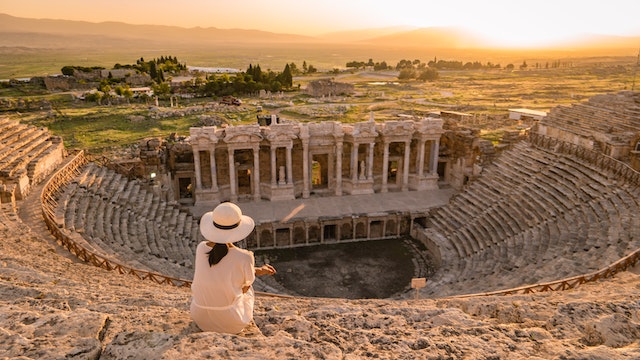 This ancient spa city's location atop Pamukkale's tourist-magnet travertines is quite spectacular. Founded as a curative centre around 190 BC by Eumenes II of Pergamum, it prospered under both the Romans and Byzantines, when large Jewish and Orthodox Christian communities comprised most of the population. Recurrent earthquakes brought disaster, and Hierapolis was finally abandoned after an AD 1334 tremor. When visiting, don't miss the Roman Theatre, the agora and the on-site museum.

From mid-October to March, last tickets are 5pm.

Byzantine Gate to the Martyrium of St Philip the Apostle

Entering at the south gate, walk through the 5th-century Byzantine gate, built of travertine blocks and marble among other materials, and pass the Doric columns of the 1st-century gymnasium. An important building in health-oriented Hierapolis, it collapsed in a 7th-century earthquake. Continue straight on for the foundations of the Temple of Apollo. As at Didyma and Delphi, eunuch priests tended the temple's oracle. Its alleged power derived from an adjoining spring, the Plutonium (named after the underworld god Pluto). Apparently only the priests understood the secret of holding one's breath around the toxic fumes that billowed up from Hades, immediately killing the small animals and birds they sacrificed.

The spectacular Roman Theatre, built in stages by emperors Hadrian and Septimius Severus, could seat more than 12,000 spectators. The stage mostly survives, along with some decorative panels and the front-row VIP 'box' seats.

From the theatre, tracks lead uphill and to the left towards the less-visited but fascinating Martyrium of St Philip the Apostle, an intricate octagonal structure on terrain where St Philip was supposedly martyred.

From the Martyrium, a rough path that gives fantastic views of the site and the plains beyond leads west across the hillside to the completely ruined Hellenistic Theatre, above the 2nd-century agora. One of the largest ever discovered, the agora was surrounded by marble porticoes with Ionic columns on three sides, and enclosed by a basilica on the fourth.

From the theatre, follow the steep overgrown diagonal path towards the poplars to reach the agora (alternatively, backtrack to the Martyrium of St Philip the Apostle for an easier path down). Walking downhill through the agora, you will re-emerge on the ridgeline main path. Turn right on colonnaded Frontinus Street, where some original paving and columns remain. Monumental archways once bounded both ends of what was the city's main commercial thoroughfare. The ruined Arch of Domitian is at the southern end; just before this is Hierapolis' large latrine building.

Beyond the Arch of Domitian are the ruined Roman Baths, and further past these, an Appian Way–style paved road leads to the north gate passing through an extraordinary necropolis, which extends up the hills. The tombs range from circular tumulus-style to ornate double-storey sarcophagi.