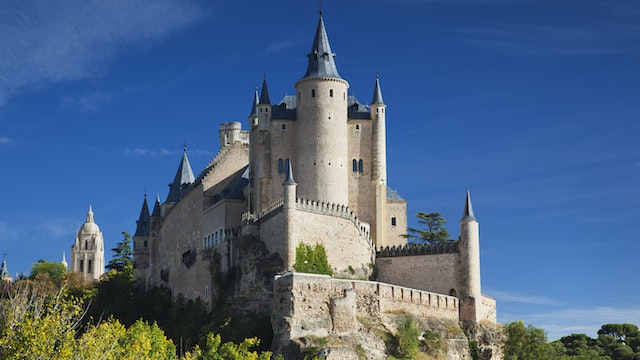 Rapunzel towers, turrets topped with slate witches' hats and a deep moat at its base make the Alcázar a prototypical fairy-tale castle – so much so that its design inspired Walt Disney's vision of Sleeping Beauty's castle. Fortified since Roman days, the site takes its name from the Arabic al-qasr (fortress). It was rebuilt in the 13th and 14th centuries, but the whole lot burned down in 1862. What you see today is an evocative, over-the-top reconstruction of the original.

Highlights include the Sala de las Piñas, with its ceiling of 392 pineapple-shaped 'stalactites', and the Sala de Reyes, featuring a three-dimensional frieze of 52 sculptures of kings who fought during the Reconquista. The views from the summit of the Torre de Juan II, which was restored in 2016, are truly exceptional.