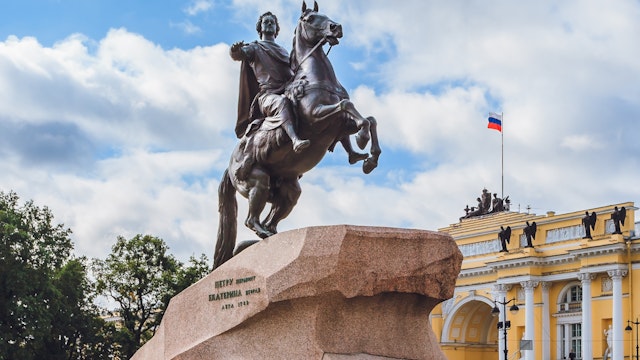 The most famous statue of Peter the Great was immortalised as the Bronze Horseman in the epic poem by Alexander Pushkin. With his horse (representing Russia) rearing above the snake of treason, Peter’s enormous statue was sculpted over 12 years for Catherine the Great by Frenchman Etienne Falconet. Its inscription reads ‘To Peter I from Catherine II – 1782’.

Many have read significance into Catherine’s linking of her own name with that of the city’s founder: she had no legitimate claim to the throne and this statue is sometimes seen as her attempt to formalise the link (philosophical, if not hereditary) between the two monarchs. The significance of the inscription in both Latin and Cyrillic alphabets would not have been lost on the city’s population, which was still in the process of Westernisation during Catherine’s reign.

Despite completing his lifework here, Falconet departed Russia a bitter, angry man. Years of arguing with the head of the Academy of Fine Arts over the finer details of the sculpture had taken its toll, and he didn’t even bother staying for the unveiling.

It’s tradition for local newlyweds to be photographed here after their weddings, so expect to see plenty of jolly wedding parties.