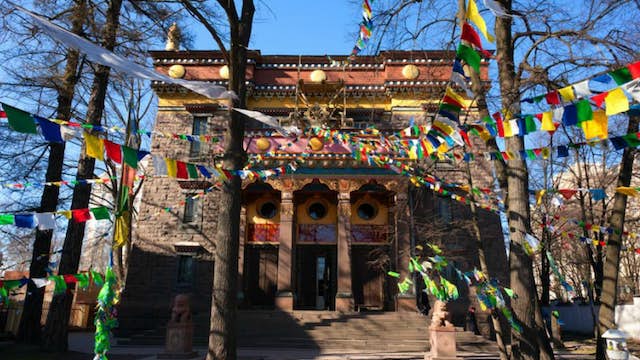 Another in the city's collection of grand religious buildings is this beautiful functioning datsan (temple) where respectful visitors are welcome. The main prayer hall has lovely mosaic decoration and there's a cheap and cheerful cafe in the basement. The temple was built between 1909 and 1915 at the instigation of Pyotr Badmaev, a Buddhist physician to Tsar Nicholas II.

Money was raised from all over Russia, and as far afield as Thailand and England, by various Buddhist organisations; it even gained the support of the Dalai Lama in Lhasa.

In the 1930s the communists shut the temple, arrested many of the monks and used the building as a military radio station. In the 1960s it was taken over by the Zoological Institute and used as laboratories. Thankfully, however, the damage was not particularly profound and the datsan was returned to the city’s small Buddhist community in 1990.