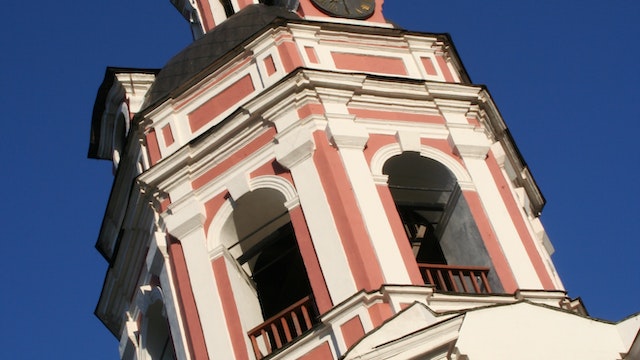 Moscow's youngest monastery, Donskoy was founded in 1591 as the home of the Virgin of the Don icon, now in the Tretyakov Gallery. This icon is credited with the victory in the 1380 battle of Kulikovo; it’s also said that, in 1591, the Tatar Khan Giri retreated without a fight after the icon showered him with burning arrows in a dream.

Most of the monastery, surrounded by a brick wall with 12 towers, was built between 1684 and 1733 under Regent Sofia and Peter the Great. The Virgin of Tikhvin Church over the north gate, built in 1713 and 1714, is one of the last examples of Moscow baroque. In the centre of the grounds is the large brick New Cathedral, built between 1684 and 1693. Just to its south is the smaller Old Cathedral, dating from 1591 to 1593.

When burials in central Moscow were banned after the 1771 plague, the Donskoy Monastery became a graveyard for the nobility, and it is littered with elaborate tombs and chapels.