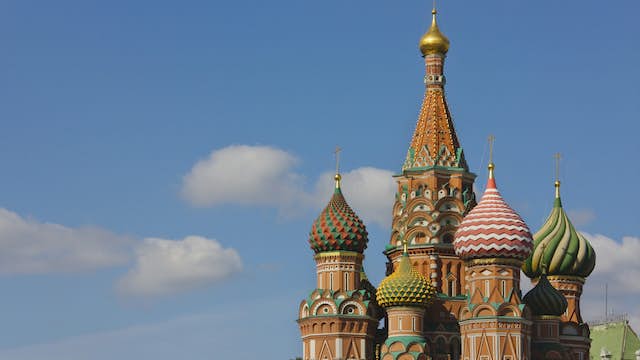 At the southern end of Red Square stands the icon of Russia: St Basil’s Cathedral. This crazy confusion of colours, patterns and shapes is the culmination of a style that is unique to Russian architecture. In 1552 Ivan the Terrible captured the Tatar stronghold of Kazan on the Feast of Intercession. He commissioned this landmark church, officially the Intercession Cathedral, to commemorate the victory. Created from 1555 to 1561, this masterpiece would become the ultimate symbol of Russia.

The cathedral’s apparent anarchy of shapes hides a comprehensible plan of nine main chapels. The tall, tent-roofed tower in the centre houses the namesake Church of the Intercession of the Mother of God. The four biggest domes top four octagonal-towered chapels: the Church of Sts Cyprian & Justina, Church of the Holy Trinity, Church of the Icon of St Nicholas the Miracle Worker, and the Church of the Entry of the Lord into Jerusalem. Finally, there are four smaller chapels in between. Each chapel was consecrated in honour of an event or battle in the struggle against Kazan.

Legend has it that Ivan had the architects blinded so that they could never build anything comparable. This is a myth, however, as records show that they were employed a quarter of a century later (and four years after Ivan’s death) to add an additional chapel to the structure.

The Church of St Vasily the Blessed, the northeastern chapel on the 1st floor, contains the canopy-covered crypt of its namesake saint, one of the most revered in Moscow. Vasily (Basil) the Blessed was known as a 'holy fool', sometimes going naked and purposefully humiliating himself for the greater glory of God. He was believed to be a seer and miracle maker, and even Ivan the Terrible revered and feared him. This 10th chapel – the only one at ground level – was added in 1588, after the saint's death. Look for the icon depicting St Vasily himself, with Red Square and the Kremlin in the background.