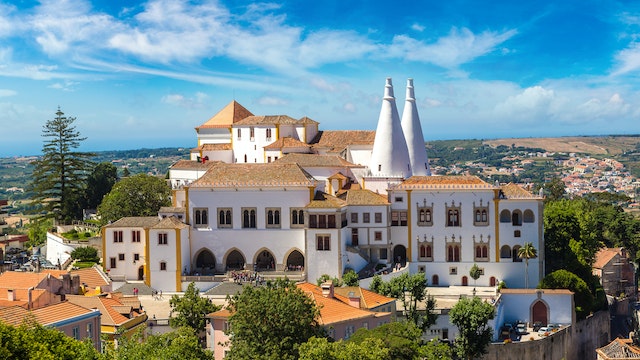 The star of Sintra-Vila is this palace, with its iconic twin conical chimneys and lavish, whimsical interior, which is a mix of Moorish and Manueline styles, with arabesque courtyards, barley-twist columns and 15th- and 16th-century geometric azulejos that are among Portugal’s oldest.

Of Moorish origins, the palace was first expanded by Dom Dinis (1261–1325), enlarged by João I in the 15th century (when the kitchens were built), then given a Manueline twist by Manuel I in the following century.

Highlights include the octagonal Sala dos Cisnes (Swan Room), adorned with frescoes of 27 gold-collared swans, and the Sala das Pegas (Magpie Room), with its ceiling emblazoned with magpies. Lore has it that the queen caught João I kissing one of her ladies-in-waiting. The cheeky king claimed the kisses were innocent and all ‘por bem’ (‘for the good’), then commissioned one magpie for every lady-in-waiting.

Other standouts are the wooden Sala dos Brasões, bearing the shields of 72 leading 16th-century families, the shipshape Galleon Room and the Palatine chapel featuring an Islamic mosaic floor. Finally, you reach the restored kitchen of twin-chimney fame, where you can almost hear the crackle of a hog roasting on a spit for the king.