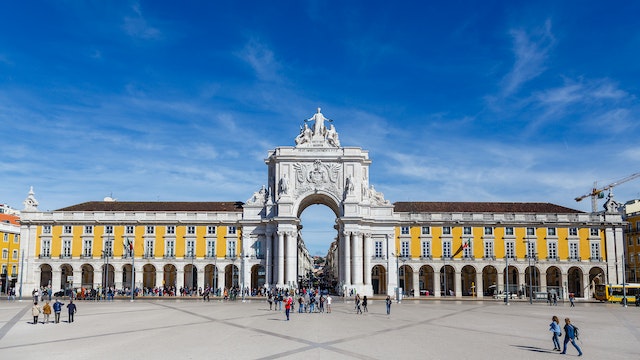 With its grand 18th-century arcades, lemon-meringue facades and mosaic cobbles, the riverfront Praça do Comércio is a square to out-pomp them all. Everyone arriving by boat used to disembark here, and it still feels like the gateway to Lisbon, thronging with activity and rattling trams.

At its centre rises the dashing equestrian statue of Dom José I, hinting at the square’s royal roots as the pre-earthquake site of Palácio da Ribeira. In 1908 the square witnessed the fall of the monarchy, when anarchists assassinated Dom Carlos I and his son (perhaps most astonishing, however, was its use as a car park in the 1980s!). The biggest crowd-puller is Verissimo da Costa’s triumphal Arco da Rua Augusta, crowned with bigwigs such as 15th-century explorer Vasco da Gama; come at dusk to see the arch glow gold.