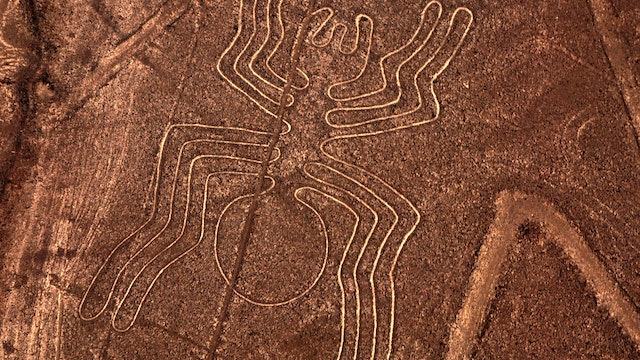 Spread over 500 sq km (310 sq mi) of arid, rock-strewn plain in the Pampa Colorada (Red Plain), the Nazca Lines are one of the world's great archaeological mysteries. Comprising over 800 straight lines, 300 geometric figures (geoglyphs) and 70 animal and plant drawings (biomorphs), the lines are almost imperceptible on the ground. From above, they form a striking network of stylized figures and channels, many of which radiate from a central axis.

The figures are mostly etched out in single continuous lines, while the encompassing geoglyphs form perfect triangles, rectangles or straight lines running for several kilometers across the desert.

The lines were made by the simple process of removing the dark sun-baked stones from the surface of the desert and piling them up on either side of the lines, thus exposing the lighter, powdery gypsum-laden soil below. The most elaborate designs represent animals, including a 180m-long lizard, a monkey with an extravagantly curled tail, and a condor with a 130m (426ft) wingspan. There's also a hummingbird, a spider and an intriguing owl-headed person on a hillside, popularly referred to as an astronaut because of its goldfish-bowl shaped head, though some believe it's a priest with a mystical owl's head.

Endless questions remain. Who constructed the lines and why? And how did they know what they were doing when the lines can only be properly appreciated from the air? Maria Reiche (1903–98), a German mathematician and long-time researcher of the Lines, theorized that they were made by the Paracas and Nazca cultures between 900 BC and AD 600, with some additions by the Wari settlers from the highlands in the 7th century. She also claimed that the Lines were an astronomical calendar developed for agricultural purposes, and that they were mapped out through the use of sophisticated mathematics (and a long rope). However, the handful of alignments Reiche discovered between the sun, stars and lines were not enough to convince scholars.

Later, English documentary maker Tony Morrison hypothesized that the Lines were walkways linking huacas (sites of ceremonial significance). A slightly more surreal suggestion from explorer Jim Woodman was that the Nazca people knew how to construct hot-air balloons and that they did, in fact, observe the lines from the air. Or, if you believe author George Von Breunig, the Lines formed a giant running track.

A more down-to-earth theory, given the value of water in the sun-baked desert, was suggested by anthropologist Johann Reinhard, who believed that the Lines were involved in mountain worship and a fertility/water cult. Recent work by the Swiss-Liechtenstein Foundation (SLSA; www.slsa.ch) agrees that they were dedicated to the worship of water, and it is thus ironic that their theory about the demise of the Nazca culture suggests that it was due not to drought but to destructive rainfall caused by a phenomenon such as El Niño.

About the only thing that is certain is that when the Nazca set about turning their sprawling desert homeland into an elaborate art canvas, they also began a debate that will keep archaeologists busy for many decades, if not centuries to come.