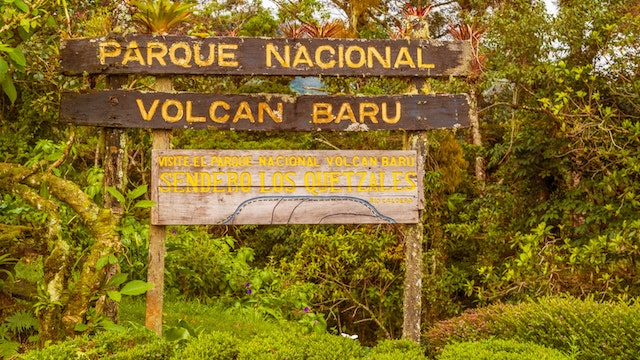 Volcán Barú is Panama's only volcano and the dominant geographical feature of western Panama. It is no longer active but has seven craters and its summit, at 3474m, is the highest point in Panama. On clear days it affords views of both the Pacific and Caribbean coasts. The 143-sq-km park provides ample opportunities for hiking, mountain climbing and camping. It's home to abundant wildlife, including pumas and the resplendent quetzal, most commonly seen here between February and May.

The fertile soil and the temperate climate of Volcán Barú's mid-altitude slopes support some of Panama's most productive agriculture, especially in the areas around Boquete and Cerro Punta, which is effectively Panama's vegetable garden. Large trees dominate the volcano's lower slopes, giving way on the upper slopes to smaller plants, bushes, scrub and alpine wildflowers.