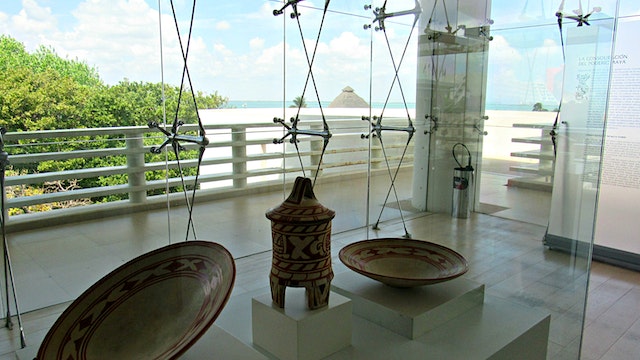 Surrounded by dense tropical forest, the contemporary Museo Maya de Cancún is a welcome respite from the beach and buffet lines of the neighboring high-rise hotels. The sleek museum contains engaging exhibits on Mayan history and art, as well as one of the Yucatán's most important collections of Mayan artifacts, most of which were discovered at key archaeological sites in the region. Behind the museum, a jungle path winds through the trees to San Miguelito, a one-time thriving Maya community that is now a collection of crumbling stone temples, dwellings and pyramids. Together, the museum and the ruins are a powerful introduction to the ancient Maya civilization and a reminder of the people who once lived here.

In 2012, eight years after hurricane damage forced Cancún’s anthropology museum to close, the shiny, new and very modern Museo Maya de Cancún opened its doors (this time integrating hurricane-resistant reinforced glass). Designed by Mexican architect Alberto García Lascurain, it came at a time when Cancún, a city known more for its white-sand beaches and girls-gone-wild party scene, sorely needed more cultural offerings for its visitors. And culture it got, with a sleek museum showcasing hundreds of Maya artifacts found at archaeological sites around the Yucatán Peninsula; it also happened to share the property with San Miguelito Ruins.

What to see at Museo Maya de Cancún

Set on a rare plot of intact jungle in the Zona Hotelera, the Museo Maya de Cancún integrates the outdoors into its contemporary design: open-air spaces, floor-to-ceiling windows, views of the tropical forest and glimpses of the glimmering Laguna Nichupté…all a reminder of what the Zona Hotelera looked like centuries ago.

The exhibition halls themselves are located at the top of a spiraling outdoor staircase, a nod to the snail shell, a Maya symbol representing physical and spiritual birth. (There are elevators too.) It’s a small museum, made up of just three exhibition halls. Two showcase the museum’s permanent collection, which includes over 3500 artifacts, about 400 of which are displayed at any given time. The first hall focuses on the archaeological sites of the modern day state of Quintana Roo, while the second covers the greater Maya world. Multi-media exhibits complement the intricately painted pottery, beaded jewelry, funerary masks and behemoth stelae (stone slab monuments). A third hall hosts temporary Maya-themed exhibits and also is home to the celebrated La Mujer de las Palmas (The Woman of the Palms), a 12,000-year-old skeleton of a woman discovered in a cenote near Tulum.

A short walk along a winding jungle path from the rear of the museum leads to the archaeological site of San Miguelito, a former Maya maritime community that once included El Rey Ruins, just down the street. Access to the Caribbean and Laguna Nichupté made San Miguelito a strategic Maya port, and it flourished between CE 1200 and 1350. The community was abandoned soon after Spanish conquistadors arrived in the mid-16th century.

A leafy circular path takes visitors through the 80-hectare site, passing the remains of residences, a columned palace and temple, and even an 8-meter-high pyramid. Small placards explain the importance and function of most of the structures.

Things you should know

Tickets cost M$80 and can only be purchased onsite; the price of admission includes access to the adjoining San Miguelito archaeological site. The museum and ruins are open year-round Tuesday to Sunday. Note: The last entry to the ruins is at 430pm.

The Museo Maya de Cancún is located on the southern end of the Zona Hotelera. There’s a bus stop in front. Take any R-1, R-2 or R-27 city bus (M$12); look for the ‘Hoteles’ or ‘Zona Hotelera’ sign. Taxis also are easy to flag down in Cancún – just be sure to agree upon a price before getting in. Finally, if you’re staying nearby, you can walk to the museum; the Zona Hotelera is lined with well-maintained sidewalks.

Driving yourself isn’t worth the hassle. Parking at the museum is free but the small lot fills up by mid-morning. In a pinch, try the free lot at Playa Delfines, about 1.6km south; otherwise, head to the pay lot at Plaza Kukulcán, a shopping mall about 4.5km north of the museum.