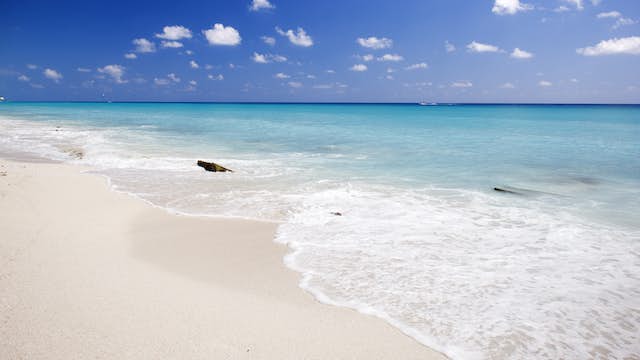 Unfolding from the base of a mild seaside bluff, Playa Delfines is one of the most scenic beaches in Cancún. A languid stretch of sand with turquoise waves and endless views, it’s the only beach in the Zona Hotelera without the backdrop of a high-rise hotel. It feels worlds apart from Cancún’s DJ-driven beach clubs and poolside drink fests. Instead, this is a locals’ favorite, where a picture perfect beach day can be found under a palapa (thatched-roof shade)  with traditional Mexican eats, and surfers and sandcastlers alike sharing the sand and sea.

Playa Delfines means “Dolphin Beach.” It was named after the pods of dolphins that were once regularly seen here. Today, dolphin sightings are rare; your best chance of spotting one is in the early morning from the beach’s lookout platform called “El Mirador,” also a local nickname for the beach.

Playa Delfines is known for its panoramic views of Cancún: turquoise waters tipped in white surf, a ribbon of tawny sand and the city’s high-rise resorts off in the distance. The best view is from El Mirador. Look for the huge block-lettered “Cancún” sign in front of it – a choice spot for pics.

Playa Delfines is a sloping, expansive beach, with soft, tawny sand and impossibly turquoise blue waters. Found at the bottom of a sandy bluff, it’s the only beach in the Zona Hotelera without a towering all-inclusive hotel on it (or any hotel, for that matter), making it especially popular with locals and independent travelers. Rows and rows of free palapas and a small playground distinguish it from Cancún’s other beaches.

Be aware that the undertow can be quite strong at Playa Delfines, at times making the water unsafe – heed the water condition flags and the lifeguards’ whistles. If you need a break from the beach, the Maya archaeological site El Rey is just across the street; its weathered stone temples and beefy iguanas provide a striking contrast to the sand and surf.

Though Cancún isn’t famous for its surf, Playa Delfines’ little rollers make it popular with a core group of local surfers. (Free parking doesn’t hurt either.) The water is warm year-round so there’s no need for wetsuits. The waves typically measure between one to two meters (about 3 to 6ft) high, though during hurricane season (June to November) they can reach five meters (about 16ft) – no joke, especially for beginners.

There are no restaurants or food shacks at Playa Delfines. Instead, vendors ply the beach selling Mexican baked goods from trays balanced on their shoulders and baskets of freshly cut mango, jicama and cucumber sold in baggies and seasoned with lime juice and chili powder. Bottles of water and soft drinks are sold from coolers near the stairway down to the beach and in the parking lot.

For a bit more sustenance, you can stock up on picnic items, even gourmet sandwiches and self-serve wine, at the Zona Hotelera’s upscale market Selecto Súper Chedraui near Cancún’s convention center. There are several casual restaurants and fast food joints in that area as well.

Admission and other practicalities

Playa Delfines is a public beach that is free to everyone. It also is one of the most easily reachable beaches in the Zona Hotelera, with a bus stop and parking lot right on the main avenue and a staircase leading down to the beach.

More things you should know

How to get to Playa Delfines

Playa Delfines is on the southernmost end of the Zona Hotelera, just off the main avenue. The R-1, R-2 and R-27 city buses (M$12) stop here, and are easy to spot with “Hoteles” or “Zona Hotelera” signs on their windshields. Taxis also make the trip – just be sure to agree on a price before you get in.

Playa Delfines is one of the few Zona Hotelera beaches with free parking. The oceanfront lot can fill up on weekends but there are usually open spots during the week; overflow parking is available across the street.