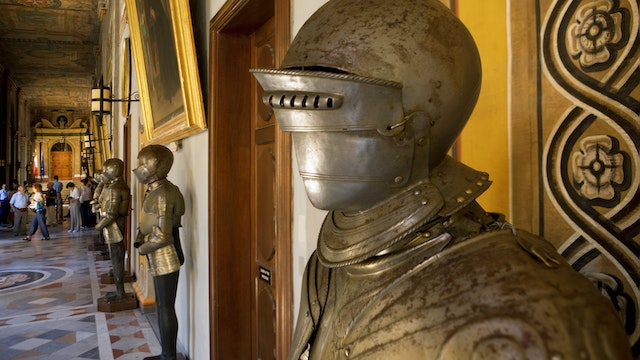 The stern exterior of the 16th-century Grand Master's Palace conceals a sumptuous interior. This was once the residence of the Grand Masters of the Knights of St John. From Malta's independence until 2015 the building was the seat of Malta's parliament, before it moved into the new Parliament Building. The Armoury is housed in what was once the Grand Master's stables.

Originally, the armour and weapons belonging to the Knights were stored at the Palace Armoury (the Great Hall), and when a Knight died these became the property of the Order. The collection of more than 5000 suits of 16th- to 18th-century armour is all that remains of an original 25,000 – Napoleon's light-fingered activities, over-enthusiastic housekeeping by the British and general neglect put paid to the rest.

Some of the most interesting pieces are the breastplate worn by la Valette, the beautifully damascened (steel inlaid with gold) suit made for Alof de Wignacourt, the captured Turkish Sipahi (cavalry) armour, and reinforced armour with bullet marks (the development of guns marked the beginning of the end for armour). There are also displays of some beautiful weapons, including crossbows, muskets, swords and pistols.

In the State Apartments, five rooms are usually open to the public, although special one-off exhibitions mean some rooms may be closed. The Grand Master's Palace remains the official residence of the Maltese president, so rooms are occasionally closed. The long Armoury Corridor, decorated with trompe l'œil painting, scenes of naval battles and the portraits and escutcheons of various Grand Masters, leads to the Council Chamber on the left. It is hung with 17th-century Gobelins tapestries gifted to the Order in 1710 by Grand Master Ramon de Perellos. They feature exotic scenes of Africa, India, the Caribbean and Brazil, including an elephant beneath a cashew-nut tree; an ostrich, cassowary and flamingo; a rhino and a zebra being attacked by a leopard; and a tableau with palm trees, a tapir, a jaguar and an iguana.

Beyond lie the State Dining Room and the Supreme Council Hall, where the Supreme Council of Order met. It is decorated with a frieze depicting events from the Great Siege of 1565, while the minstrels' gallery bears paintings showing scenes from the Book of Genesis. At the far end of the hall a door gives access to the Hall of the Ambassadors, or Red State Room, where the Grand Master would receive important visitors, and where the Maltese president still receives foreign envoys. It contains portraits of the French kings Louis XIV, Louis XV and Louis XVI, the Russian Empress Catherine the Great and several Grand Masters. The neighbouring Pages' Room, or Yellow State Room (despite the abundance of greenish tones), was used by the Grand Master's 16 attendants.