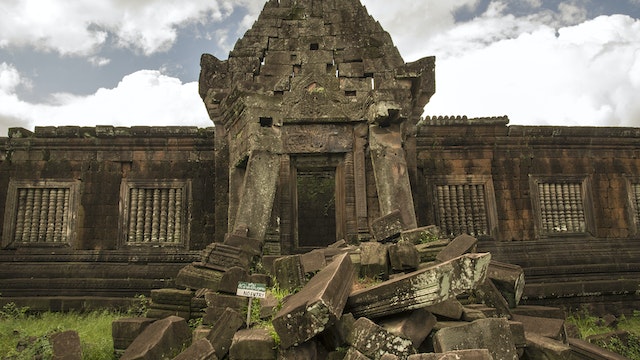 Bucolic Wat Phu sits in graceful decrepitude, and while it lacks the arresting enormity of Angkor in Cambodia, given its few visitors and more dramatic natural setting, these small Khmer ruins evoke a more soulful response. While some buildings are more than 1000 years old, most date from the 11th to 13th centuries. The site is divided into six terraces on three levels joined by a frangipani-bordered stairway ascending the mountain to the main shrine at the top.

Visit in the early morning for cooler temperatures (it gets really hot during the day, and on the lower levels there isn't any shade) and to capture the ruins in the best light. Make sure to grab a map at the entrance as there is little to no signage here.

The electric cart takes you past the great baray (ceremonial pond; nŏrng sá in Lao) and delivers you to the large sandstone base of the ancient main entrance to Wat Phu. Here begins a causeway-style ceremonial promenade lined by stone lotus buds and flanked by two much smaller baray that still fill with water, lotus flowers and the odd buffalo during the wet season.

Wat Pu's middle section features two exquisitely carved quadrangular pavilions built of sandstone and laterite that are believed to date from the mid-10th or early 11th century. The buildings consist of four galleries and a central open courtyard. Wat Phu was converted into a Buddhist site in later centuries but much of the original Hindu sculpture remains in the lintels, which feature various forms of Vishnu and Shiva.

A good example is the eastern pediment of the north pavilion, which is a relief of Shiva and Parvati sitting on Nandi, Shiva's bull mount.

Next to the southern pavilion stands the much smaller Nandi Hall (dedicated to Shiva's mount). It was from here that an ancient royal road once led over 200km to Angkor Wat in Cambodia. In front is a smaller version of the initial causeway, this one flanked by two collapsed galleries, leading to a pair of steep staircases.

At the base of a second stairway is an impressive and now very holy dvarapala (sentinel figure) standing ramrod straight with sword held at the ready. Most Thai and Lao visitors make an offering to his spirit before continuing up the mountain. If you step down off the walkway and onto the grassy area just north of here you'll come to the remains of a yoni pedestal, the cosmic vagina-womb symbol associated with Shaivism, and two unusually large, headless and armless dvarapala statues half-buried in the grass. These are the largest dvarapala found anywhere in the former Angkorian kingdom.

After the dvarapala a rough sandstone path ascends quickly to another steep stairway, atop which is a small terrace holding six ruined brick shrines – only one retains some of its original form. From here two final staircases, the second marked by crouching guardians also sans heads and arms, take you to the top, passing through the large terraces you saw clearly from the bottom of the mountain.

Shade is provided along much of this entire middle-level route from dork jąmpąh (plumeria or frangipani), the Lao national tree.

On the uppermost level of Wat Phu is the sanctuary itself. It has many carvings, notably two guardians and two apsara (celestial dancers), and it once enclosed a Shiva lingam that was bathed, via a system of sandstone pipes, with waters from the sacred spring that still flows behind the complex. The sanctuary now contains a set of very old, distinctive Buddha images on an altar. The brick rear section, which might have been built in the 9th century, is a cella (cell), where the holy lingam was kept.

Just north of the Shiva lingam sanctuary, amid a mess of rocks and rubble, look around for two unique stone carvings known as the elephant stone and the crocodile stone. Crocodiles were semi-divine figures in Khmer culture, but despite much speculation that the stone was used for human sacrifices, its function – if there was one – remains unknown. The crocodile is believed to date from the Angkor period, while the elephant is thought to date from the 16th century. Also look out for an interesting chunk of staircase framed by two snakes and some small caves that were probably used for meditation in ancient days.

When you've seen everything here, just sitting and soaking up the wide-angle view of the baray, the plains and the Mekong is fantastic. A small shop sells snacks and cool drinks.