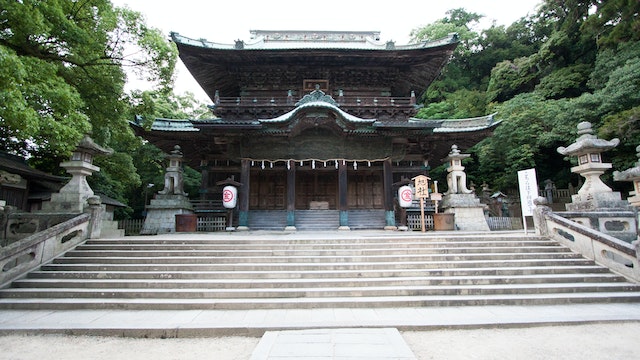 Konpira-san or, more formally, Kotohira-gū, was originally a Buddhist and Shintō temple dedicated to the guardian of mariners. It became exclusively a Shintō shrine after the Meiji Restoration.

A lot of fuss is made about how strenuous the climb (1368 steps) to the top is, but if you've made it this far in Japan, you've probably completed a few lengthy ascents to shrines already.

The first notable landmark on the long climb is Ō-mon, a stone gateway that leads to Hōmotsu-kan, where the collection of treasures is pretty underwhelming for such a major shrine. Nearby you will find five traditional-sweets vendors at tables shaded by large white parasols. A symbol of ancient times, the vendors (the Gonin Byakushō – Five Farmers) are descendants of the original families who were permitted to trade within the grounds of the shrine. Further uphill is Shoin, a designated National Treasure that dates from 1659 and has some interesting screen paintings and a small garden.

Continuing the ascent, you eventually reach large Asahi-no-Yashiro. Built in 1837, this large hall is dedicated to the sun goddess Amaterasu and is noted for its ornate wood-carving. From here, the short final ascent, which is the most beautiful leg of the walk, brings you to Gohonsha and Ema-dō. The latter is filled with maritime offerings ranging from pictures of ships and models to modern ship engines. From this level, there are spectacular views that extend right down to the coast and over the Inland Sea.

Keen climbers can continue for another 500 or so steps up to Oku-sha (Inner Shrine), which features stone carvings of tengu (bird-like demons) on the cliff.