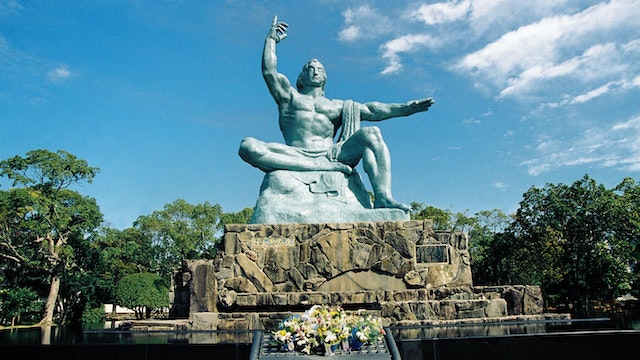 A still, serene and deeply moving place, Nagasaki's Peace Park commemorates the atomic bombing of the city on August 9, 1945, which reduced the surrounding area to rubble and claimed tens of thousands of lives. Together with the Atomic Bomb Museum and National Peace Memorial Hall (both a short walk away), this is an essential stop for any visitor who wants to understand how the disaster shaped the city.

The green, spacious park is presided over by the 10-tonne bronze Nagasaki Peace Statue, designed in 1955 by Kitamura Seibō. It also includes the dove-shaped Fountain of Peace (1969) and the Peace Symbol Zone, a sculpture garden with contributions on the theme of peace from around the world.

Practically adjoining the park to the south is the smaller Atomic Bomb Hypocentre Park, with a monument marking the epicentre of the deadly blast.

On 9 August a rowdy antinuclear protest is held within earshot of the more formal official memorial ceremony for those lost to the bomb.