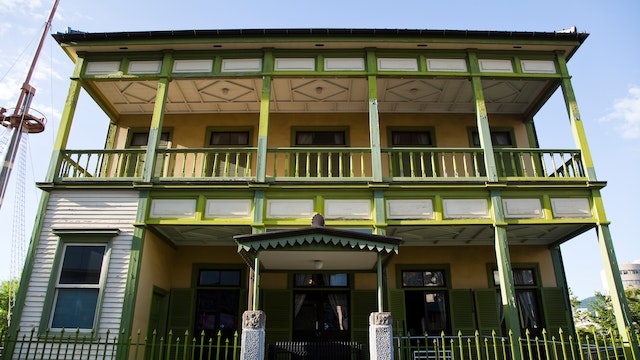 In 1641 the Tokugawa shogunate banished all foreigners from Japan, with one exception: Dejima, a fan-shaped, artificial island in Nagasaki harbour. From then until the 1850s, this tiny, 15,000-sq-metre Dutch trading post was the sole sanctioned foreign presence in Japan. Today the city has filled in around the island and you might be tempted to skip it. Don't. Seventeen buildings, walls and structures (plus a miniature Dejima) have been painstakingly reconstructed.

Restored and reopened in 2006 and constantly being upgraded, the buildings are as instructive inside as they are appealing outside, filled with exhibits covering the spread of trade, Western learning and culture, archaeological digs, and rooms combining Japanese tatami (tightly woven floor matting) with Western wallpaper. There's excellent English signage. Allow at least two hours.

Free walking-tour maps of the entire site are available, and there's even a kimono-rental shop (¥2000/6000 per hour/day) for those who want to feel even more historically connected.