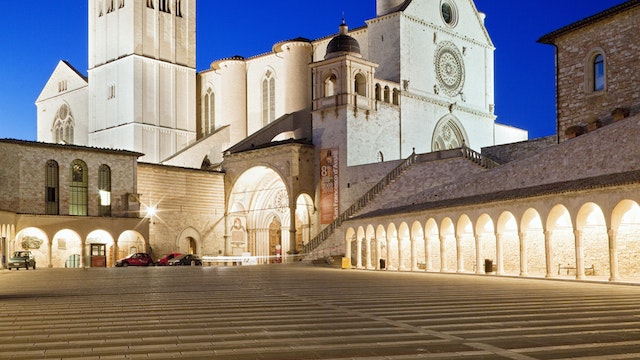 Visible for miles around, the Basilica di San Francesco is the crowning glory of Assisi's Unesco-listed historic centre. The 13th-century complex is comprised of two churches: the Gothic Basilica Superiore, with its celebrated cycle of Giotto frescoes, and beneath, the older Basilica Inferiore where you'll find works by Cimabue, Pietro Lorenzetti and Simone Martini. Also here, in the Cripta di San Francesco, is St Francis' much-venerated tomb.

The Basilica Superiore, which was built immediately after the lower church and consecrated in 1253, is home to one of Italy's most famous works of art – a cycle of 28 frescoes depicting the life of St Francis. Vibrant and colourful, these are generally attributed to a young Giotto, though some art historians contest this, claiming that stylistic discrepancies suggest they were created by several different artists. To view them in the correct sequence, start on the right wall near the altar and work your way around in a clockwise order.

From outside the upper church, stairs lead down to the Romanesque Basilica Inferiore and yet more glorious works of art. Almost every inch of the vaulted, dimly lit church, constructed between 1228 and 1230, is adorned with frescoes by Giotto and fellow Sienese and Florentine masters Cimabue, Lorenzetti and Martini. Among the works to look out for are four vault frescoes (aka vele or 'sails') above the main altar. Attributed to Giotto and collaborators, including the mysterious Maestro delle Velle, these depict The Glory of St Francis and the Allegories of the Franciscan Virtues (poverty, chastity and obedience).

The basilica has its own information office, on the piazza in front of the lower church, where you can pick up an audio guide in 10 languages (€6). Groups of 10 or more can schedule guided tours (in various languages), led by a resident Franciscan friar – check the website or call ahead for booking details.