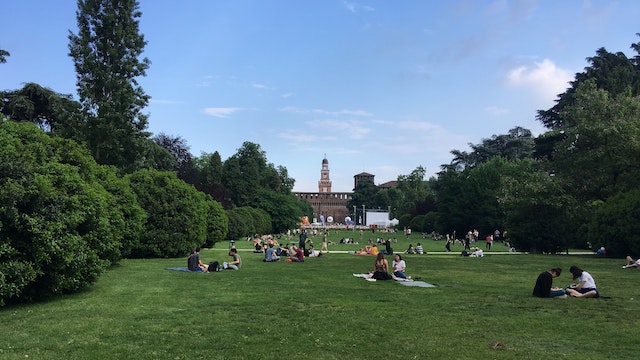 Situated behind Castello Sforzesco, Parco Sempione was once the preserve of hunting Sforza dukes. Then Napoleon came to town and set about landscaping. First the French carved out orchards; next they mooted the idea in 1891 of a vast public park. It was a resounding success, and today Milanese of all ages come to enjoy its winding paths and ornamental ponds. Giò Ponti's 1933 steel tower, built for a Triennale exhibition, provides a fantastic 108m-high viewing platform over the park.

Also in the park is the Arena Civica, Napoleon's mini-colosseum, which he opened in typically flamboyant style in 1807. Built by Luigi Canonica, its ingenious engineering allowed it to be flooded with water from nearby canals to stage mock sea battles. Now it hosts community football and rugby matches, and the last stage of the annual city marathon.