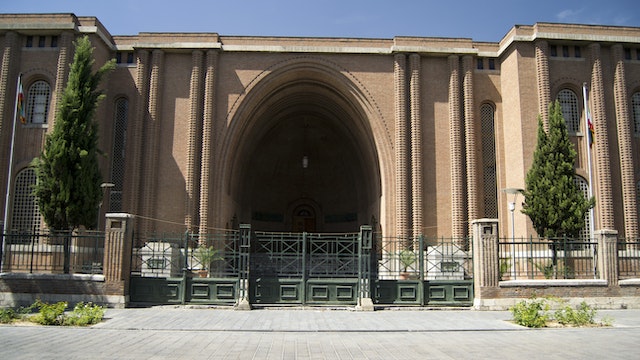 This modest museum is no Louvre, but it is chock-full of Iran’s rich history. The collection includes ceramics, pottery, stone figures and carvings, mostly taken from excavations at Persepolis, Ismailabad (near Qazvin), Shush, Rey and Turang Tappeh. Unfortunately, the presentation of these treasures is less than inspired, and the lack of useful explanations underwhelming (ask for an English ‘brochure’ when buying the ticket).

The building, designed by French architect André Godard and completed in 1928, is one of the more attractive modern buildings in Tehran, blending Sassanian principles such as the grand iwan-style entrance with art deco–style brickwork.

Inside, among the finds from Shush, there’s a stone capital of a winged lion, some delightful pitchers and vessels in animal shapes, and colourful glazed bricks decorated with double-winged mythical creatures. A copy of the diorite stele detailing the Babylonian Code of Hammurabi, found at Shush in 1901, is also displayed – the original being in Paris.

Exhibits from Persepolis include a magnificent human-headed capital, a cuneiform inscription proclaiming the might and godly affinity of Xerxes, and a striking frieze of glazed tiles from the central hall of the Apadana Palace. Also on display are a famous trilingual inscription from the time of Darius I, a bull-headed capital and carved staircase, a statue of a sitting dog that looks like it was carved just weeks ago, and four foundation tablets inscribed in cuneiform.

One of the more startling exhibits is the Salt Man from Zanjan. He’s thought to have been a miner who died in the 3rd or 4th century AD, but whose white-bearded head, leg in a leather boot and tools were preserved by the salt in which he was buried. Look also for the impressive selection of Luristan bronzes, dating back to the 8th century BC.

There’s a small cafe (open 9am to 5pm) in a courtyard behind the museum.