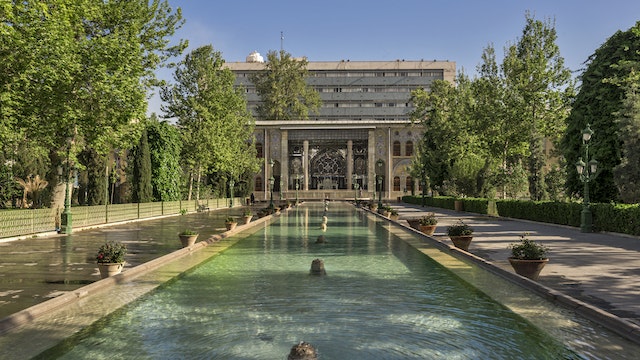 The glories and excesses of the Qajar rulers are played out across this complex of grand buildings decorated with beautifully painted tiles and set around an elegant garden that's worth visiting in its own right. There are separate tickets for nine different sections, which you need to buy at the gate: the ones worth paying extra for are the Main Halls, which includes the spectacular Mirror Hall, and the Negar Khaneh (Iranian Painting Gallery).

Although there was a Safavid-era citadel on this site, it was Nasser al-Din Shah (r 1848–96), impressed by what he’d seen of European palaces, who created the ‘Palace of Flowers’ you see today. Originally it was much bigger, with inner and outer sections to encompass offices, ministries and private living quarters, but several surrounding buildings were pulled down under the Pahlavis.

Heading in a clockwise direction around the courtyard from the ticket office, a long reflecting pool to leads to the Takht-e Marmar (Marble Throne Verandah), a mirrored, open-fronted audience hall dominated by a magnificent throne. Made in the early 1800s for Fath Ali Shah (r 1797–1834), the throne is constructed from alabaster mined in Yazd and supported by carved human figures. This hall was used on ceremonial occasions, including the Napoleon-style self-coronation of Reza Shah in 1925.

On the corner of the same building is the gorgeous Khalvate-e Karim Khani (Karim Khan Nook), all that remains of a 1759 structure that served as the Terhan residence of Karim Khan Zand (r 1751–79). But it was Nasser al-Din Shah who enjoyed this elevated terrace most, smoking qalyan (water pipe) and perhaps contemplating his next asset sale as qanat (underground channel) water bubbled out of the marble fountain nearby. His marble tombstone now stands on the terrace.

Next is the Negar Khaneh (Iranian Painting Gallery), which displays a fine collection of Qajar-era art. Especially interesting are the portraits of the shahs wearing the jewels and crowns you can see in the National Jewels Museum, and pictures of everyday life in 19th-century Iran.

The next set of rooms comprises the Royal Museum (also called the Special Museum), a fascinating treasure trove of decorative art pieces and objects amassed by the shahs.

The palace's highlight are the Main Halls, including the dazzling Talar-e Ayaneh (Mirror Hall). Built between 1874 and 1877 the Peacock Throne was housed here before it was moved to the National Jewels Museum. It was used for the coronation of Mohammad Reza Shah in 1967 (25 years after he came to power) and royal weddings. Today it and two adjoining halls house gifts, including a set of green malachite table decorations from Russia and fine porcelain from France, Germany and the UK.

Further east is the Howze Khaneh (Pool Room), named for the small pool and fountain in its centre. It houses a collection of paintings and sculptures of 19th-century European royalty given to their Qajar counterparts by the same European monarchs.

Next door is the aptly named Talar-e Berelian (Brilliant Hall), where the use of mirrored glass on all surfaces and twinkling chandeliers reaches its apogee.

At the east end of the garden, the imposing Shams-Al Emarat (Edifice of the Sun) blends European and Persian architectural traditions. Born of Nasser al-Din Shah’s desire to have a palace that afforded him a panoramic view of the city, it was designed by master architect Moayer al-Mamalek and built between 1865 and 1867. Only part of the building's ground floor is open for view, showcasing yet another sequence of mirrored and tiled rooms.

Next door stand four soaring badgirs (wind towers; used to catch breezes and funnel them down into a building to cool it), rising above the restored Emarat-e Badgir, first erected in the reign of Fath Ali Shah. The interior has typically ostentatious mirror work and is worth a quick look.

In the basement, the Aks Khaneh (Historic Photograph Gallery) exhibits a fascinating collection of historic photographs; one picture shows the inside of a Zoroastrian tower of silence, with bodies in varying states of decay.

Next up, the small Talar-e Almas (Diamond Hall) offers more blinged-to-the-max decoration. The more subdued teahouse and restaurant underneath might well be more appealing.

Finally, back near the entrance, the Abyaz Palace houses the Ethnographical Museum featuring a range of mannequins in traditional ethnic costumes.