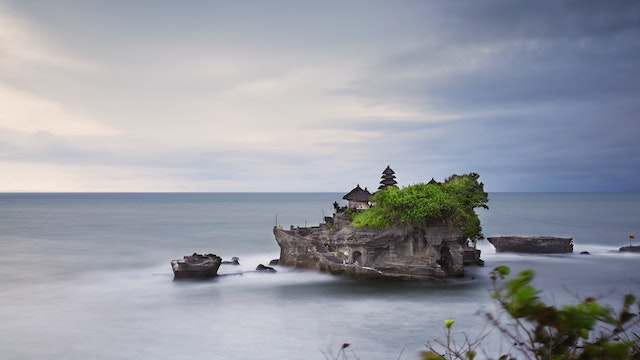 Pura Tanah Lot is a hugely popular tourist destination. It does have cultural significance to the Balinese, but this can be hard to discern amid the crowds, clamour and chaos – especially for the overhyped sunsets. It's the most visited and photographed temple in Bali; however, it has all the authenticity of a stage set – even the tower of rock that the temple sits upon is an artful reconstruction (the entire structure was crumbling) and more than one-third of the rock is artificial.

For the Balinese, Pura Tanah Lot is one of the most important and venerated sea temples. Like Pura Luhur Ulu Watu, at the tip of the southern Bukit Peninsula, and Pura Rambut Siwi to the west, it is closely associated with the Majapahit priest Nirartha. It’s said that each of the sea temples was intended to be within sight of the next, so they formed a chain along Bali’s southwestern coast – from Pura Tanah Lot you can usually see the clifftop site of Pura Ulu Watu far to the south, and the long sweep of sea shore west to Perancak, near Negara.

But at Tanah Lot itself you may just see from one vendor to the next. To reach the temple, take the walkways that run from the vast car parks through a mind-boggling sideshow of tatty souvenir shops down to the sea. Clamorous announcements screech from loudspeakers.

You can walk over to the temple itself at low tide, but non-Balinese people are not allowed to enter.

You won't be able to miss the looming Pan Pacific Nirwana resort with its water-sucking golf course. It has been controversial since the day it was built, because many feel its greater height shows the temple disrespect.