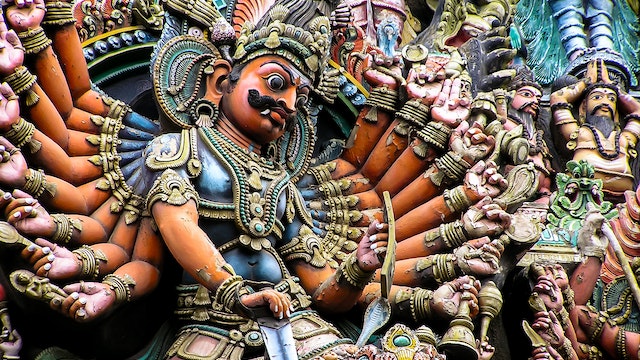 The colourful abode of the triple-breasted warrior goddess Meenakshi (‘fish-eyed’ – an epithet for perfect eyes in classical Tamil poetry) is generally considered to be the peak of South Indian temple architecture, as vital to this region's aesthetic heritage as the Taj Mahal to North India. It’s not so much a 17th-century temple as a 6-hectare complex with 12 tall gopurams, encrusted with a staggering array of gods, goddesses, demons and heroes (1511 on the 55m-high south gopuram alone).

According to legend, the beautiful Meenakshi (a version of Parvati) was born with three breasts and this prophecy: her superfluous breast would melt away when she met her husband. This happened when she met Shiva and took her place as his consort. The existing temple was mostly built during the 17th-century reign of Tirumalai Nayak, but its origins go back 2000 years to when Madurai was a Pandyan capital.

The four streets surrounding the temple are pedestrian-only. Temple dress codes and security are airport-strict: no shoulders or legs (of either gender) may be exposed, and no bags or cameras are allowed inside. Despite this, the temple has a happier atmosphere than some of Tamil Nadu's more solemn shrines, and is adorned with especially vibrant ceiling and wall paintings. Every evening at 9pm, a frenetic, incense-clouded procession carries an icon of Sundareswarar (Shiva) to Meenakshi's shrine to spend the night; visitors can follow along.

Before or after entering the temple, look around the Pudhu Mandapa. The main temple entrance is through the eastern (oldest) gopuram. First, on the right, you'll come to the Thousand Pillared Hall, now housing the fascinating Temple Art Museum. Moving on into the temple, you'll reach a Nandi shrine surrounded by more beautifully carved columns. Ahead is the main Shiva shrine, flanked on each side by massive dwarpals, and further ahead to the left in a separate enclosure is the main Meenakshi shrine, both off limits to non-Hindus. Anyone can, however, wander round the Golden Lotus Tank, where a small pavilion jutting out at the western end has ceiling murals depicting Sundareswarar and Meenakshi's marriage. Leave the temple via a hall of flower sellers and the arch-ceilinged Ashta Shakti Mandapa – lined with relief carvings of the goddess' eight attributes and displaying the loveliest of all the temple's elaborately painted ceilings; this is actually the temple entrance for most worshippers.