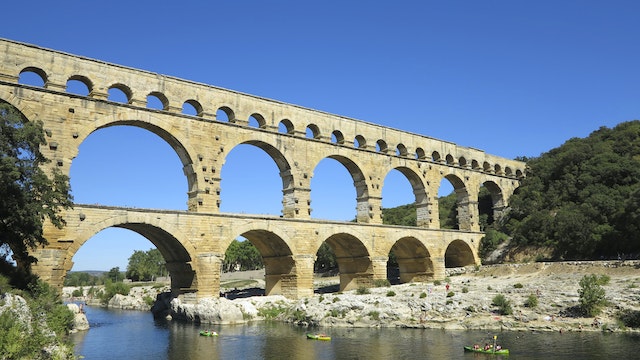 The extraordinary three-tiered Pont du Gard was once part of a 50km-long system of channels built around 19 BC to transport water from Uzès to Nîmes. The scale is huge: the bridge is 48.8m high, 275m long and graced with 52 precision-built arches. It was the highest in the Roman Empire. At the visitors centre on the left, northern bank, there's an impressive, high-tech museum featuring the bridge, the aqueduct and the role of water in Roman society.

Each block was carved by hand and transported from nearby quarries – no mean feat, considering the largest blocks weighed over 5 tonnes. The height of the bridge descends by 2.5cm across its length, providing just enough gradient to keep the water flowing – an amazing demonstration of the precision of Roman engineering.

You can walk across the tiers for panoramic views over the Gard River, but the best perspective on the bridge is from downstream, along the 1.4km Mémoires de Garrigue walking trail. If you buy the Pass Aqueduc, you can walk the bridge's topmost tier, along which the water flowed (guided tour). For children, there's Ludo, an activity play area.

Early evening is a good time to visit, as admission is cheaper (adult/child €5/3) and the bridge is stunningly illuminated after dark.

It's 21km northeast of Nîmes.