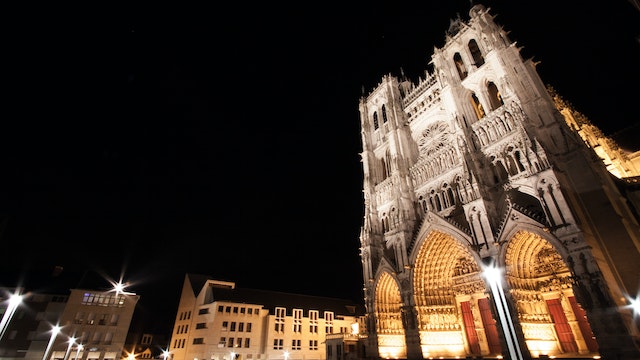 A Unesco World Heritage Site, the largest Gothic cathedral in France (at 145m long) and the largest in the world by volume was begun in 1220 to house the skull of St John the Baptist. It's renowned for its soaring Gothic arches (42.3m high over the transept), unity of style and immense interior; look for the 17th-century statue known as the Ange Pleureur (Crying Angel), behind the Baroque high altar.

The octagonal, 234m-long labyrinth on the black-and-white floor of the nave is easy to miss as the soaring vaults draw the eye upward. Part of the skull of St John the Baptist, framed in gold and jewels, can be seen in the trésor (treasury). Plaques in the south transept honour American, Australian, British, Canadian and New Zealand soldiers who perished in WWI.

To get a sense of what you're seeing, it's worth hiring a multilingual audioguide at Amiens' tourist office. Weather permitting, visitors willing to brave 307 steps can climb the north tower for spectacular views; tickets are sold in the boutique to the left as you walk through the west façade. The cathedral is closed to visitors during religious ceremonies.

A free 45-minute light show bathes the cathedral's façade in vivid medieval colours nightly from mid-June to the third weekend in September, and from early December to 1 January. The photons start flying at 10.45pm in June, 10.30pm in July, 10pm in August, 9.45pm in September and 7pm in December.