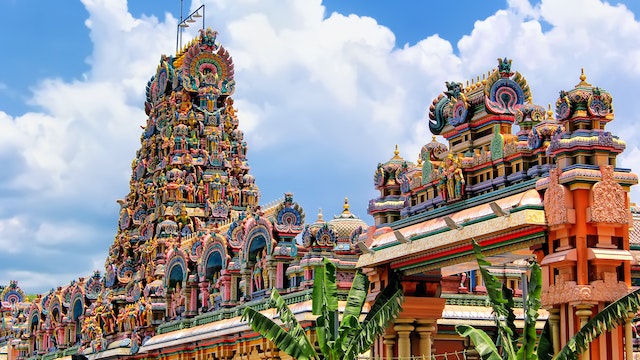 The South Indian fire-walking festival is held here during July or August. Of all Fiji's cultural rituals, the extraordinary art of fire walking is perhaps the most impressive. Watching men display the poise of a lead ballerina while they traverse a pit of blazing embers without combusting is truly baffling. Even more mystifying is the fact that, originally, this ritual was practised in Fiji only on the tiny island of Beqa, and by two neighbouring and disparate cultures - Indigenous Fijian and Hindu - for completely different reasons.

Indigenous Fijian firewalking is known as vilavilairevo (literally 'jumping into the oven'). Hindu fire walking is part of an annual religious festival coinciding with a full moon in July or August and lasts 10 days.

Hindu fire walking is a religious sacrament performed mostly by descendants of southern Indians. They believe life is like walking on fire; discipline helps them to achieve a balanced life, self-acceptance and to see good in everything.

The Hindu fire walking takes place at many temples around Fiji. Preparations for the ceremony are overseen by a priest and take three to 10 days, with the fire walking the climax of the ritual. During this period participants isolate themselves, abstain from sex and eating meat, and meditate to worship the goddess Maha Devi. The participants rise early, pray until late at night, survive on little food or sleep and dress in red and yellow, which symbolises the cleansing of physical and spiritual impurity. Yellow turmeric is smeared on the face as a symbol of prosperity and power over diseases. On the final day the participants at the Mariamma Temple bathe in the sea. The priests pierce the tongues, cheeks and bodies of the fire walkers with three-pronged skewers. The fire walkers then dance into an ecstatic trance for about 2km back to the temple for the fire walking; their altered state enabling them to perform the feat. Devotees' bodies are whipped before and during the ceremony. If fire walkers are focused on the divine Mother they should not feel pain.

A decorated statue of the goddess is placed facing the pit for her to watch and bless the ceremony. It only takes about five seconds to walk along the pit, which is filled with charred wood raked over glowing coals, and the walk is repeated about five times to chanting and drumming.

Fijian fire walking: the ability to walk barefoot on white-hot stones without being burned was, according to local legend, granted to a local chief by the leader of the veli, a group of little gods. Now the direct descendants of the chief (tui qalita) serve as the bete (priests) who instruct in the ritual of fire walking.

Preparations for fire walking used to occupy a whole village for nearly a month. Firewood and appropriate stones had to be selected, costumes made and various ceremonies performed. Fire walkers had to abstain from sex and refrain from eating any coconut for up to a month before the ritual. None of the fire walkers' wives could be pregnant, or it was believed the whole group would receive burns.

Traditionally vilavilairevo was only performed on special occasions in the village of Navakaisese. Today, though, it's performed only for commercial purposes and has little religious meaning. There are regular performances at the Pacific Harbour Arts Village, at the larger resort hotels, and at Suva's annual Hibiscus Festival.