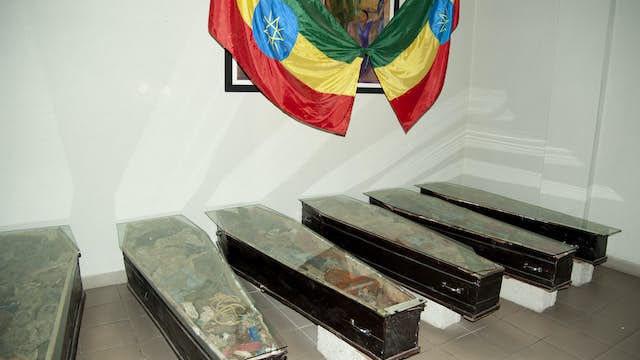 ‘As if I bore them all in one night, they slew them in a single night.’ These were the words spoken by the mother of four teenage children all killed on the same day by the Derg, as she officially opened the small but powerful ‘Red Terror’ Martyrs Memorial Museum in 2010. Over a couple of rooms the museum reveals the fall of Emperor Haile Selassie and the horrors of life under Mengistu’s Derg regime.

The museum is well laid out and incredibly moving, nothing more so than the walls of photos and names of just some of the estimated half a million killed under the Derg, or the display cabinets filled with human belongings dug out of mass graves. Some of the skulls and other bones are displayed alongside a photo of the victim and the personal artefacts they had on them when they died. The watch hanging in one display case was given by its owner to his wife just as he was led away by the soldiers of the Derg. His words: ‘Keep this safe. One day you will need it’. When the museum opened, his wife brought the watch here.

Excellent English-speaking guides are often available, although you may prefer to just look on in silence.

The museum is funded by donations only.

Note: As of July 2022, the museum is closed to the public for the time being due to building damage.