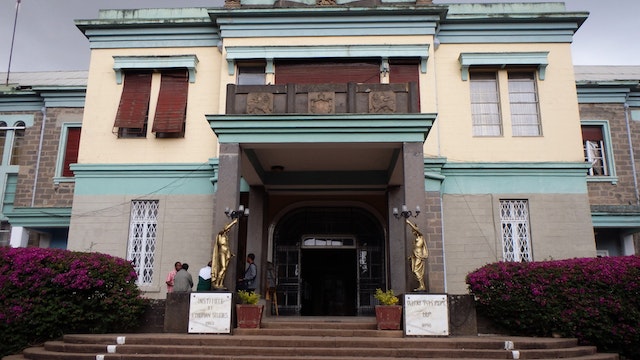 Set within Haile Selassie’s former palace, and surrounded by the beautiful gardens and fountains of the university’s main campus, is the enthralling Ethnological Museum. Even if you’re not a museum fan, this one is worth a bit of your time – it’s easily one of the finest museums in Africa, showing the full sweep of Ethiopia's cultural and social history across two floors.

The show starts before you even get inside: facing the entrance, look for the intriguing set of 13 stairs spiralling skyward. Each step was placed by the Italians as a symbol of Fascist domination, one for every year Mussolini held power (starting from his march to Rome in 1922). A small Lion of Judah (the symbol of Ethiopian monarchy) sits victoriously atop the final step, like a jubilant punctuation mark at the end of a painfully long sentence.

Within the entrance hall you’ll find a small exhibition dedicated to the history of the palace, and the doorway to the Institute of Language Studies library.

The museum truly comes into its own on the 1st floor, where superb artefacts and handicrafts from Ethiopia’s peoples are distinctively displayed. Instead of following the typical static and geographical layout that most museums fall into, these displays are based upon the life cycle. First comes Childhood, with birth, games, rites of passage and traditional tales. We particularly enjoyed the ‘Yem Tale’, a story of selfishness, dead leopards and sore tails! Adulthood probes into beliefs, nomadism, traditional medicine, war, pilgrimages, hunting, body culture and handicrafts. The last topic is Death and Beyond, with burial structures, stelae and tombs. The exhibition gives a great insight into Ethiopia’s many rich cultures.

Other rooms on this floor show the preserved bedroom, bathroom and exorbitant changing room of Emperor Haile Selassie, complete with a bullet hole in his mirror courtesy of the 1960 coup d’etat.

The 2nd floor is home to two drastically different, but equally delightful, displays. The vibrant hall focuses on religious art, with an exceptional series of diptychs, triptychs, icons, crosses and magic scrolls. Magic scrolls, like the Roman lead scrolls, were used to cast curses on people or to appeal to the gods for divine assistance. The collection of icons is the largest and most representative in the world. Senses of another sort are indulged in the small cavelike corridor that sits next to the hall. Inside, the black surrounds leave you nothing to look at besides traditional musical instruments from across Ethiopia. If you're lucky you might have a soundtrack accompany you.

It’s well worth coming to this museum twice; once at the start of your journey through Ethiopia and once at the end when you’ll be able to put everything into context.

After you’ve lapped up the treasures in the museum, stop by the double-decker London bus next to the university entrance gates. Brought to Addis by Haile Selassie, it’s now a bar and packed with students.