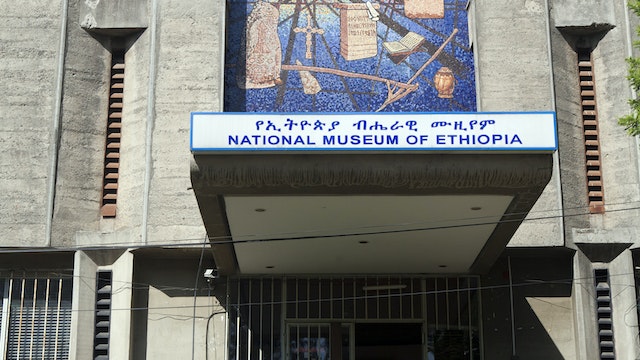 The collection on show at the National Museum is ranked among the most important in sub-Saharan Africa, but sadly many of its exhibits are poorly labelled, lit and displayed. Far and away the highlight is the palaeontological exhibition in the basement, the home of world-famous Lucy. Her 1974 discovery in the Afar region of northwestern Ethiopia changed our understanding of human origins forever. This section is well labelled in English, so if your time is limited spend most of it here.

On the basement level, you'll find two remarkable casts of Lucy, a fossilised hominid and easily Ethiopia's best-known ancient inhabitant. One lays prone, while the other stands much as she did some 3.2 million years ago, truly hitting home how small our ancient ancestors were. The real bones are preserved in the archives of the museum.

Also here is the fossilized evidence of some amazing extinct creatures, like the massive sabre-toothed feline Homotherium and the gargantuan savannah pig Notochoerus.

The periphery of the ground floor focuses on the pre-Aksumite, Aksumite, Solomonic and Gonderian periods. The wide array of artefacts includes an elaborate pre-1st-century-AD bronze oil lamp showing a dog chasing an ibex, a fascinating 4th-century-BC rock-hewn chair emblazoned with mythical ibexes, and ancient Sabaean inscriptions. The middle of the room hosts a collection of lavish royal paraphernalia, including Emperor Haile Selassie’s enormous (and rather hideous) carved wooden throne.

On the 1st floor, there’s a vivid display of Ethiopian art ranging from early (possibly 14th-century) parchment to 20th-century canvas oil paintings by leading modern artists. Afewerk Tekle’s massive African Heritage is one of the more notable pieces. Another painting depicts the meeting of Solomon and Sheba. Note the shield of the soldier next to Solomon, which is engraved with the Star of David and a Christian Cross. The artist must have forgotten that this meeting is said to have occurred long before the birth of Christianity.

English-speaking guides are available for free (they should be tipped afterwards) and help to bring things alive.