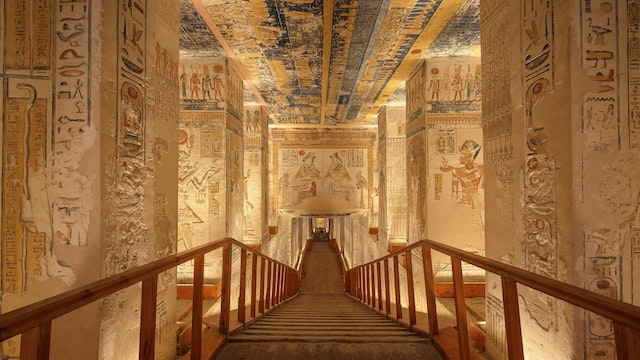 The west bank of Luxor had been the site of royal burials since around 2100 BC, but it was the pharaohs of the New Kingdom period (1550–1069 BC) who chose this isolated valley dominated by the pyramid-shaped mountain peak of Al Qurn (The Horn). Once called the Great Necropolis of Millions of Years of Pharaoh, or the Place of Truth, the Valley of the Kings has 63 magnificent royal tombs.

The tombs have suffered greatly from treasure hunters, floods and, in recent years, mass tourism: carbon dioxide, friction and the humidity produced by the average 2.8g of sweat left by each visitor have affected the reliefs and the stability of paintings that were made on plaster laid over limestone. The Department of Antiquities has installed dehumidifiers and glass screens in the worst-affected tombs. They have also introduced a rotation system: a limited number of tombs are open to the public at any one time. The entry ticket gains access to three tombs, with extra tickets to see the tombs of Ay, Tutankhamun, Seti I and Ramses VI.

The road into the Valley of the Kings is a gradual, dry, hot climb, so be prepared, especially if you are riding a bicycle. Also be prepared to run the gauntlet of the tourist bazaar, which sells soft drinks, ice creams and snacks alongside the tat. The air-conditioned Valley of the Kings Visitors Centre & Ticket Booth has a good model of the valley, a movie about Carter’s discovery of the tomb of Tutankhamun and toilets (there are Portakabins higher up, but this is the one to use). A tuf-tuf (a little electrical train) ferries visitors between the visitors centre and the tombs (it can be hot during summer). The ride costs LE4. It’s worth having a torch to illuminate badly lit areas but you cannot take a camera – photography is forbidden in all tombs.

The best source of information about the tombs, including detailed descriptions of their decoration and history, can be found on the Theban Mapping Project website. Some tombs have additional entry fees and tickets.