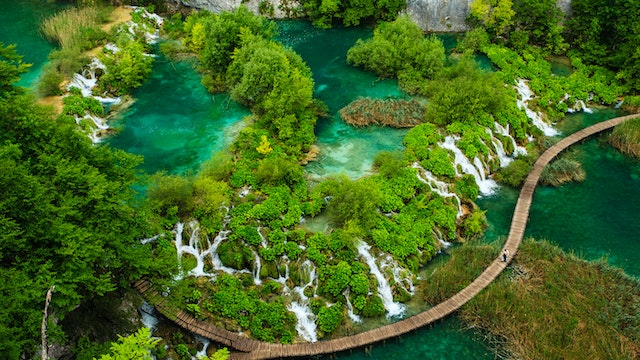 By far Croatia's top natural attraction and the absolute highlight of Croatia's Adriatic hinterland, the Plitvice Lakes National Park is a glorious expanse of forested hills and turquoise lakes. Within the boundaries of this heavily forested national park, 16 crystalline lakes tumble into each other via a series of waterfalls and cascades. The mineral-rich waters carve through the rock, depositing tufa in continually changing formations. Clouds of butterflies drift above the 11 miles (18km) of wooden footbridges and pathways that snake around the edges and across the rumbling water.

It's exquisitely scenic – so much so that in 1979 Unesco proclaimed it a World Heritage Site. The name is slightly misleading though, as it's not so much the lakes that are the attraction here but the hundreds of waterfalls that link them.

From Entrance 2, the southernmost of the two entrances, it’s an easy amble down to the shore of 2.5-mile-long (4km) Kozjak Lake and P1 (a hut and boat stop). Surrounded by steep, forested slopes, Kozjak is the park's largest lake, and forms a boundary between the upper and lower valleys. It contains a small oval island composed of travertine. A good path runs along the lake’s eastern shore: follow it to reach the spectacular lower lakes – with forests, grottoes, steep cliffs and waterfalls – or take one of the regular free boats. Next is emerald Milanovac Lake, then the path runs below cliffs beside Gavanovac Lake. Above is the open-topped cavern of Šupljara, where there’s a lovely viewpoint over Plitvice’s lower reaches. A wooden walkway cuts across to the north bank, around reed-fringed Kaluđerovac Lake and past two towering sets of waterfalls. The second, the aptly named Veliki Slap, is the tallest in Croatia, with a 255ft (78m) drop.

To explore the upper section of the lakes, return to P1 and follow the trails to Gradinsko Lake, bordered by reeds that often harbor nesting wild ducks. A series of cascades links Gradinsko to beautiful Galovac Lake, where an abundance of water has formed a series of ponds and falls. A set of concrete stairs over the falls, constructed long ago, has been covered by travertine, forming even more falls in a spectacular panorama. Several smaller lakes are topped by the larger Okrugljak Lake, supplied by two powerful waterfalls. Continuing upwards, you’ll come to Ciginovac Lake and, finally, Prošćansko Lake, surrounded by thick forests.

Various combinations of boat, road train (a tourist bus with carriages) and hiking are available, depending on your level of fitness and the amount of time you have. A useful map is printed on the tickets and the information booths are extremely helpful.

While the park is beautiful year-round, spring and fall are the best times to visit. In spring and early summer the falls are flush with water, while in autumn the changing leaves put on a colorful display. Winter is also spectacular, although snow can limit access and the free park transport doesn't operate. Unquestionably the worst time to visit is in the peak months of July and August, when the falls reduce to a trickle, parking is problematic and the sheer volume of visitors can turn the walking tracks into a conga line and cause lengthy waits for the buses and boats that ferry people around the park.

Tickets must be purchased online at least one day in advance of your visit. The extraordinary natural beauty of the park merits a full day's exploration, but you can still experience a lot on a half-day trip from Zadar or Zagreb. You must be able to walk a fair distance to get the most out of the place.

If you've got limited time, the upper lake section can be completed in two hours. The lower section takes about three, although it's best to start with the bus ride and end with the boat to save yourself a climb. Swimming is not permitted in any of the lakes.

The four hotels operated by the national park are relatively charmless institutions, but they're conveniently positioned right on the park's borders. There are also two campsites. Otherwise, there are excellent guesthouses within walking distance in surrounding villages. For a particularly atmospheric alternative, hunt for private rooms in tiny Korana, an idyllic village set by a gurgling stream and reached by a narrow road north of the Korana bridge.