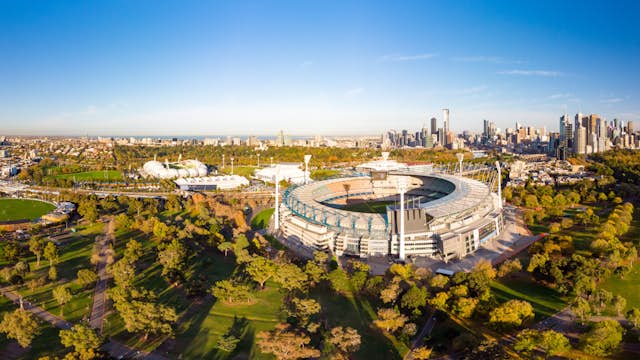 With a capacity of 100,000 people, the "G" is one of the world’s great sporting venues, hosting cricket in summer and AFL (Australian Football League, Aussie rules or "footy") in winter – for many Australians it's hallowed ground.

Though the MCG has undergone numerous renovations and expansions during its lifetime, the original cricket ground dates back to 1853. It hosted its first game of Aussie Rules football in 1858, and in 1877 it was the venue for the first test cricket match between Australia and England. Since then, the ground has served as the central stadium for the 1956 Melbourne Olympics and played host to two Cricket World Cups, as well as the 2006 Commonwealth Games. It was also used as an army barracks during WWII. Despite this venerable history, the oldest parts of the current structure are the light towers, dating from the 1980s.

A number of historical sporting items, including the hand-written notes defining the rules of Australian Rules Football, are on display at the Australian Sports Museum, located within the bowels of the stadium.

There’s plenty of evidence to suggest that Aboriginal Australians played a form of football called "marngrook" prior to European settlement. A scar tree near the MCG, from which bark was removed to make canoes, serves as a reminder that Melbourne’s cricket fans were not the first to gather at this site – some Indigenous Australians like to call it the Melbourne Corroboree Ground. Marngrook is remembered in the name of a trophy awarded to the winner of an annual AFL match.

How to tour Melbourne Cricket Ground

Make it to a game if you can (tickets for matches are available via the official stadium website); otherwise, there are non-match-day tours that take you through the stands, media and coaches’ areas, changing rooms and members' lounges. Discounts are available if you get a combined Australian Sports Museum and tour ticket.

If you're in the area and after a quick taste of a live AFL game, sometimes it's possible to wander in free of charge at three-quarter time (around 1½ hours after starting time) to see the last 30 minutes of the action.