The ultimate guide to Galicia

Galicia gives travellers an alternative Spanish experience. With its strong Celtic connections, wild beaches and arguably the best seafood in Europe, this unique region in Spain’s northwest remains largely unexplored by the tourists flocking to Barcelona or the Costa del Sol.

While Santiago de Compostela is Galicia’s most famous city and one of the world’s biggest international pilgrimage destinations, this terra de meigas (land of witches, as Galicia is known) offers another unmissable stop: the magnificent rías, sprawling estuaries along its 1200km of coast. The rías are divided into the Rías Baixas (Lower Rías) in the southern part of the region and facing the Atlantic Ocean, and the Rías Altas (Upper Rías), bathed by the feisty Cantabrian Sea. 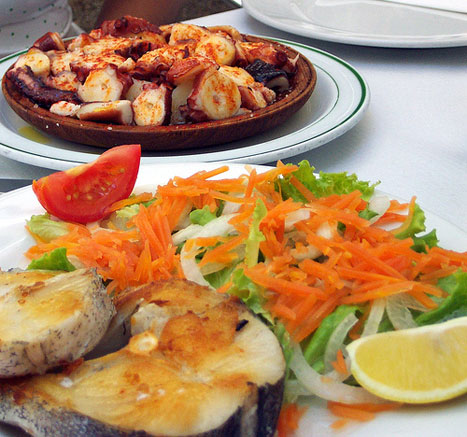 Reasons 1 & 2 to come back to Galicia by ebifry. Creative Commons Attribution licence (CC BY 2.0)

Experience a holiday the way the locals do at the Rías Baixas. The relatively calm waters and gentle temperatures attract tourists from June to September, although the occasional cloudy day or summer thunderstorm can be expected – the perfect excuse to shelter in any of the superb marisco restaurants of the area. Nobody does seafood like the Galicians and foodies shouldn’t miss staples such as empanada (Galician fish or meat pie), vieiras á galega (breaded scallops) or the classic pulpo á feira (boiled octopus with garlic and paprika).

There are five Rías Baixas: the most southern ones (Ría de Vigo, Ría de Pontevedra, Ría de Arousa) are easily accessible and draw more summer tourists, while the roads get bumpier and the landscape becomes more dramatic in the northern Ría de Muros e Noia and Ría de Corcubión. The highlights are:

Sanxenxo: unofficially known as ‘the beach of Madrid’ due to the high number of madrileños who holiday in this little municipality, Sanxenxo boasts the highest number of European blue flag beaches in Spain along its relatively modest 36km of coast. A Lanzada (Galicia’s most famous beach - learn more here), Montalvo, nearby nudist spot Bascuas and off-the-beaten-path Paxariñas are all must-dos if you are a friend of the sun.

Castro de Baroña: this excavated Celtic settlement in the wild Ría de Muros e Noia is only accessible via a mile-long footpath, but the panoramic views of the ría and historic sights are essential to understanding Galicia’s history. The area is a stone’s throw from the quaint villages of Porto do Son (where you can learn about the settlements), Pobra do Caramiñal and Ribeira, still largely unspoilt by tourism.

Dunas de Corrubedo: a sandy paradise located between the Ría de Arousa and the Ría de Muros e Noia, Dunas de Corrubedo (www.eco-viajes.com) is a natural park whose biggest feature is a gigantic, mobile dune that local children roll down to reach Playa do Vilar, a 1200m beach with the finest sand and a nudist area (if you're feeling frisky).

Illa de A Toxa: if you are looking for a bit of pampering, A Toxa Island in the Ría de Arousa is famous for its thermal waters, the source of its many luxury hotels and spas (some dating back to the 19th century; www.turismogrove.es). With just under 50 official residents in barely 110 acres of land, A Toxa is the perfect place for a quiet weekend retreat. 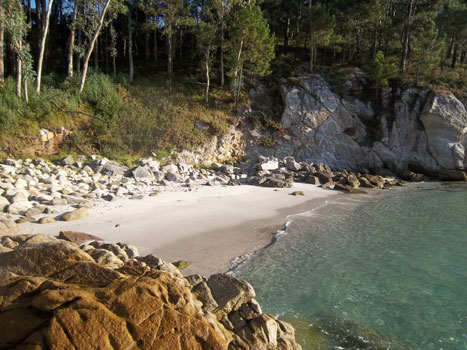 Illas Cíes: an idyllic, unspoilt group of islands off the coast of Vigo only accessible by ferry (see www.mardeons.com), the Illas Cíes are part natural bird reserve, part hidden getaway for Galicians. There are no hotels on the islands, just a camping site and a restaurant, so come prepared to get very close to nature. Scuba diving around the islands is also possible (see www.buceoislascies.com).

Finisterre: ‘Land’s End’, as the Romans baptised it, was believed for many years to be the most western point of Europe (it is actually Cape Roca in Portugal). As its name suggests, the area is out of the way from all the main roads, but travellers venturing this far will be rewarded with some breathtaking hiking trails overlooking the Atlantic Ocean and exceptional sights such as the Cascada do Ézaro, the only waterfall in Europe to give into the open ocean. 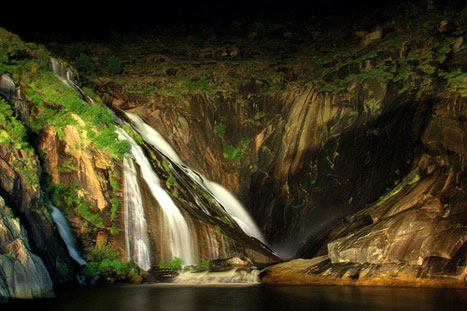 A glimmering view of the Cascado do Ézaro: 'Desembocadura do Xallas' by Javier Pais. Creative Commons Attribution licence (CC BY 2.0)

The harsher landscapes, cooler temperatures and agitated waters of northern Galicia make the Rías Altas the ultimate destination for delving deep into the region’s culture. Along with some of the biggest cities in the region (A Coruña or Ferrol), you will find plenty of old-world fishing towns and untamed beaches ripe for a bit of surfing. The unmissable hotspots are:

Costa da Morte: the rocky ‘Death Coast’ gained its nefarious nickname from the many shipwrecks throughout the centuries. Stories abound of tortured ghosts of sailors haunting local villagers, but the area has also seen some true natural disasters (like the sinking of oil tanker Prestige in 2002, which sparked regeneration in the area).

Praia das Catedrais: arguably the most striking beach in Galicia, the ‘Beach of the Cathedrals’ near Ribadeo is blessed with unique natural architecture such as stone arches, grottos and secret passages – only accessible at low tide.

Ortigueira: this postcard-perfect village is ideal for experiencing rural Galicia in all its dusty glory. A walk around Ortigueira’s cobbled streets shines a light on the ordinary lives of northern Spaniards. Ortigueira is also worldwide famous for its legendary Festival de Ortigueira, one of the biggest folk music festivals in Europe.

Estaca de Bares: this isolated cliff is Spain’s northernmost point. Visitors can explore the remnants of an old Phoenician port and fish factory, as well as several abandoned and reconverted military sites dating back to World War II. The Estaca de Bares lighthouse, built in 1850 and still active, looms over the beautiful rock-strewn landscape and bird sanctuaries. 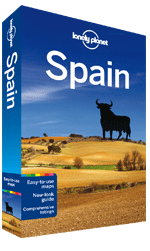