In southwestern Kenya, lions, giraffes, zebras and gazelles share the rangelands of the Great Rift Valley with the Maasai people. Many of these warrior-pastoralists continue to keep herds of cattle, sheep, and goats, perform age-old rites of passage, and live off the grid in traditional manyattas – huts of sticks and mud.

But times are changing, and one Maasai chief, Salaton Ole Ntutu, believes that the best way for his tribe to hang on to the essence of their culture is to consciously adapt to the modern world, rather than be crushed by it. In his community, Maji Moto, he has launched education, health, women’s rights, and conservation initiatives, which are funded in part by the Maji Moto Maasai Cultural Camp (majimotomaasaicamp.com), where visitors are invited to stay and experience a bit of Maasai life. 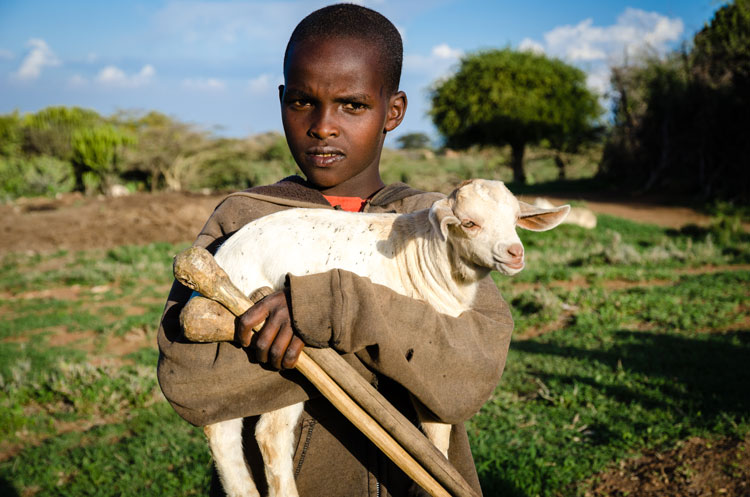 The best way to get a feel for Maji Moto and begin to understand the relationship that the people have with the land is to go on a walking tour with a Maasai guide. On a jaunt into the Loita Hills, which rise behind the tourist camp, you’ll learn how the Maasai use virtually every plant you see – like olkinyenyai, which aids digestion and is added to meat soups; or the sap from the osilalei tree, which is chewed like gum; or the sacred oreteti tree, which is only used for prayer and ceremonial purposes. Walking out along the Loita Plains, you’re sure to see wildlife, from wildebeests and impalas to elephants, ostriches, and more. The Maasai usually carry spears, just in case they encounter any predators. Along the way, you’ll meet local herders tending their livestock – many of whom are children, like this boy holding a kid goat. 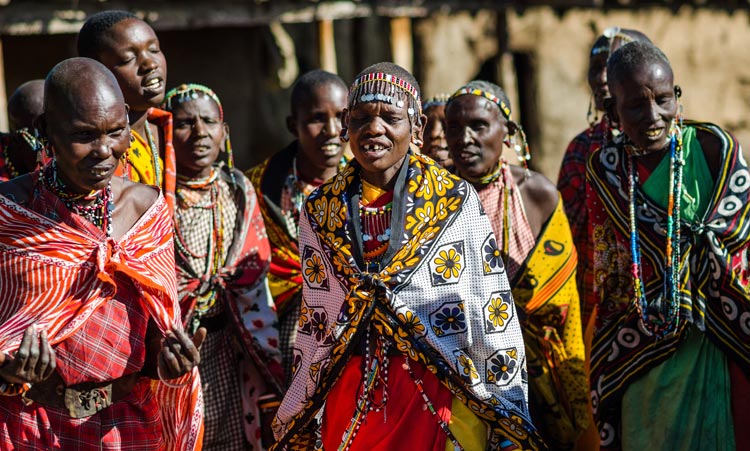 Not far from the tourist camp, Salaton created Maji Moto’s 'widows' village' to help support women who lose their husbands and are left penniless (and, more importantly, livestock-less). The widows live together with their children in a group of huts, family-style, sharing a herd of animals. They invite visitors to their manyatta, where they perform traditional Maasai songs and dances and display for sale the finely beaded jewellery they make by hand (and offer at incredibly reasonable prices, with no pressure to buy). 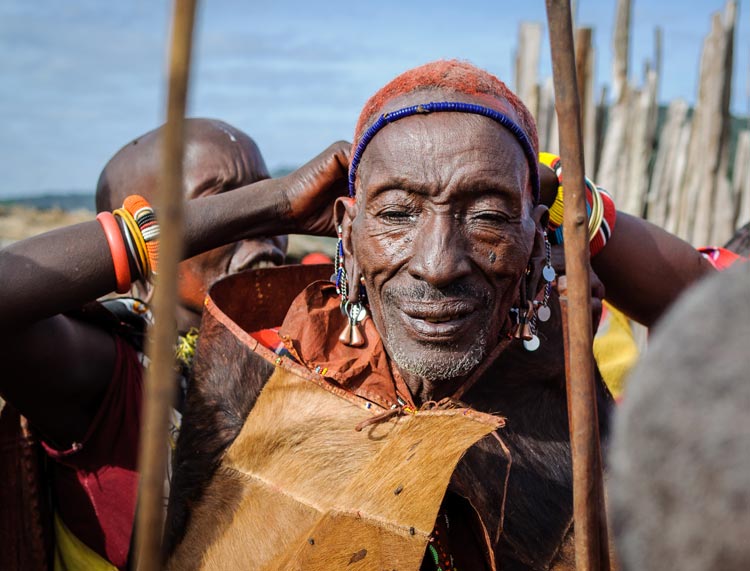 A goatskin cape and ceremonial headdress mark the auspicious occasion of this man's son being circumcised. Image by Michael Benanav / Lonely Planet.

Here, the father of a teenage boy who has just been ritually circumcised wears a ceremonial goatskin cape and beaded headdress, while his hair is covered with sacred red ochre. It is a day of great honour for him and his family, as his son passes into a new stage of life. Traditionally, Maasai girls are also circumcised, but Salaton is actively campaigning to end this practice in Maji Moto, and it is on the decline. 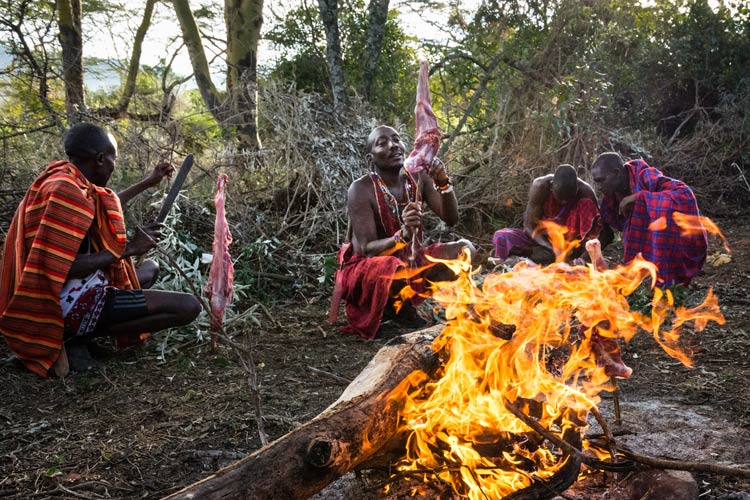 Traditionally, young Maasai warriors live in the wilderness, away from any manyattas, for long periods of time. Salaton invites guests to see what this is like, sleeping in the bush away from the camp and, for dinner, slaughtering a goat or sheep and roasting it over a fire. As night falls, there is singing and dancing accompanied by the consumption of plenty of local home brew (made from fermented honey and aloe plants). 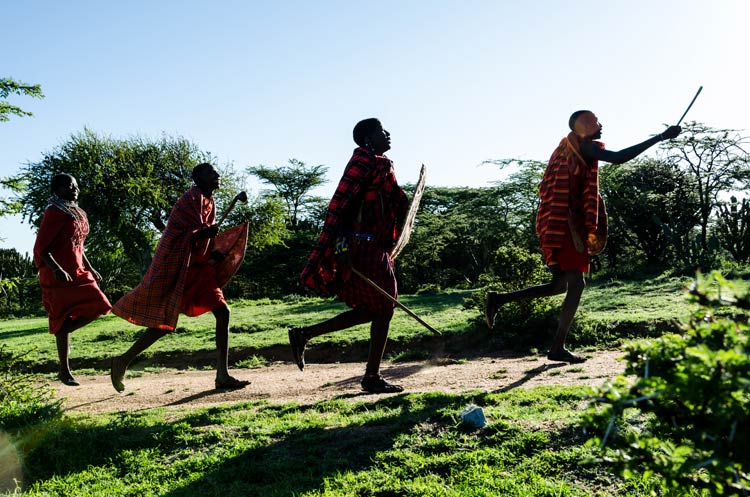 Here, some of the camp staff are celebrating after an intense round of 'warrior training', which is similar to dodge ball – except that instead of a rubber ball, two teams hurl green stalks of the wild sisal plant at each other, as hard and fast as they can. Each person wields a painted goatskin shield for protection. Visitors are strongly encouraged to join in. Of course you can also practise throwing a real spear – using a tree for a target. 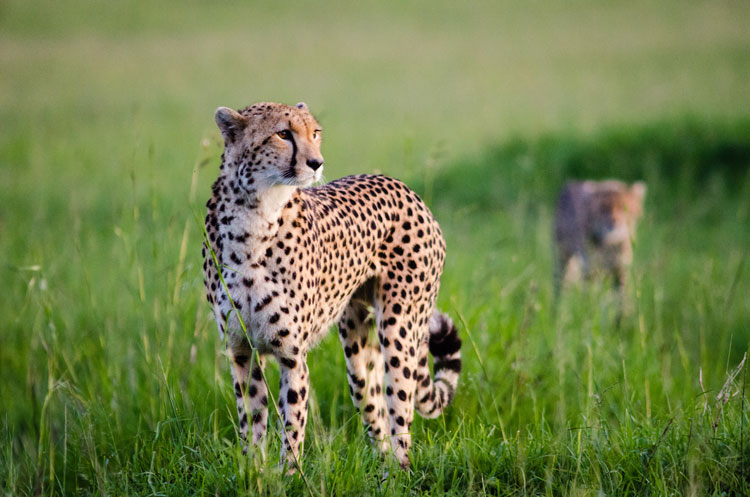 A cheetah and cub in the Masai Mara National Reserve. Image by Michael Benanav / Lonely Planet.

The world-famous Masai Mara National Reserve is only about 60km from Maji Moto. Best known for the thunderous procession of wildebeests and other ungulates that come through between July and October, any time of year is a good time to visit. Home to 95 species of mammals, reptiles, and amphibians, including all of the 'Big Five' (lions, elephants, leopards, buffaloes and rhinos), the rolling savannahs are like the backdrop of a National Geographic documentary. Salaton can arrange safaris – from single-day excursions to multi-day adventures – directly from Maji Moto. The experience of watching these animals move and hunt in their natural habitat is simply astonishing. Here, a cheetah and one of her cubs stalk prey as dusk falls.

Accommodation in simple but comfortable huts, with shared pit toilet and hot spring-water showers, costs USD$100 per person per night. Camping with your own gear costs $40. Prices include three meals a day, snacks, and all local activities. Safaris to Masai Mara cost extra.

Michael Benanav is an author and freelance photographer. To see more of his work, and more photos of life at Maji Moto, visit www.michaelbenanav.com.