While Havana – with its grandiose architecture and vibrant culture – continues to be the number one attraction for travelers to Cuba, taking a break from the city buzz will refresh your batteries and give you a broader scope of Cuba’s authentic experiences.

Let the sea breeze pamper your senses in Playas del Este or indulge your ecological side in Las Terrazas and Soroa – with options less than an hour away from the Capitolio, Havana is the perfect base for a trip filled with adventure.

Located just 30 minutes from the hustle and grit of Havana’s city center is the palm-fringed coast known as Playas del Este (Eastern Beaches). There are half a dozen beaches out this way, but Santa María – with appreciable shade and the softest, cleanest sand – is the best. Head to the beach town of Guanabo to hang with locals. The stretch near Boca Ciega is a traditional LGBT hangout. Most Cubans will not go near the beach in the 'cold' winter months between January and April, but during the peak summer season these beaches get incredibly crowded.

Getting There: Hop on the T3 Habana Bus Tour, which runs from Centro Habana to Playas del Este (via Parque Histórico Militar Morro-Cabaña); the main stop is in Parque Central opposite the Hotel Inglaterra. All-day tickets for T3 are CUC$10 and services run from 9am to 7pm. A regular private cab costs around CUC$25, one way.

Embrace the green at Las Terrazas and Soroa

A drive into the heart of the undulating and verdant Sierra del Rosario range (Cuba’s first UNESCO Biosphere Reserve), is a sure tonic for fatigue and worry. Las Terrazas, 45 minutes west of Havana, is a former artist colony now eco-tourism experiment with open studios, canopy, hiking, birdwatching and swimming in river cascades.

Lonely Planet Local Tip: Nearby Soroa is famed for its Orquideario – an orchid garden and research station with more than 700 species that bloom between December and March. Off-the-radar Lago El Palmar hosts a Ranchón offering drinks and snacks, plus an option for renting boats. Less than a mile (2 km) away is Cafetal Buenavista, a well-preserved remnant of Cuba’s oldest coffee plantation.

Getting There: Book a day tour to Las Terrazas and Soroa at a Cubatur desk in any hotel lobby or take a colectivo (shared bus mainly used by tourists) at the Viazul station and hop off at Rancho Curujey, nearby Las Terrazas – make sure to confirm your stop with the driver. Standard private cabs or taxis cost around CUC$60 from Havana to Las Terrazas.

Roll a world-class cigar in Viñales

The Viñales Valley, peppered with rare pin-cushion hills, is spectacular enough to warrant longer than a day trip, if you have the time. The town is quaint in that ceramic-roof, cane-rocker-on-the-porch kind of way and the hospitality of Cuban guajiros (countryfolk) is unsurpassed. Accept any invite to go horseback riding or hiking amid the oddly bulbous limestone mogotes (hills); Viñales becomes a rock climbing mecca from December through April. The A-frame structures covered in shaggy fronds you will see are drying houses for the world’s finest cigar tobacco, grown throughout this part of Pinar del Río province.

Lonely Planet Local Tip: Los Jazmines is the perfect lookout point for some world-prize-worthy panoramic photos over Viñales Valley, but choose Balcón del Valle restaurant if you also fancy to have lunch while overlooking the mogotes. For a friendly ambience and freshly made cocktails don’t miss Tres Jotas right in Salvador Cisneros street, Viñales main road.

Getting There: Viñales is connected with Havana by Viazul buses departing daily. You can also book day trips at Havana’s hotels, most of which include lunch and added excursions for less than CUC$70, round trip. For more flexibility, rent a car or hire a taxi with driver for the day.

Swim in crystal-clear waters of Varadero

Cuba’s finest beach destination, a 12-mile (20km) long peninsula with powdery sand, bathtub-temperature sea and all-inclusive resorts, Varadero has all the amenities required to enjoy a fun-filled day trip. Take an early ride 87 miles (140 km) east of Havana center and you’ll be sitting under a palm leaf umbrella before 10 am. Take a dip in one of the Caribbean’s most pristine beaches or sip cocktails in the shade before heading out for a late lunch at any of Varadero’s notable restaurants. With impeccable service and seafood, Varadero 60 comes highly recommended, but for an after-lunch spirit opt for the mahogany-wooden bar Casa Blanca atop Mansión Xanadú – the view over the sunbathed peninsula is simply unparalleled.

Lonely Planet Local tip: Save an extra hour before returning to Havana and tour Parque Josone, a verdant oasis in the middle of Varadero town, with access from Av 1st & Calle 58.

Getting There: Book an air-con Viazul bus at Terminal de Ómnibus, leaving at 8 am and every couple of hours after noon until 6 pm. When Viazul buses are in high demand, colectivos taxis are also an option. You can book one directly at any hotel desk, asking at your casa particular, or just hanging around at the bus station. A regular taxi from Havana costs around CUC $100-150 one way. 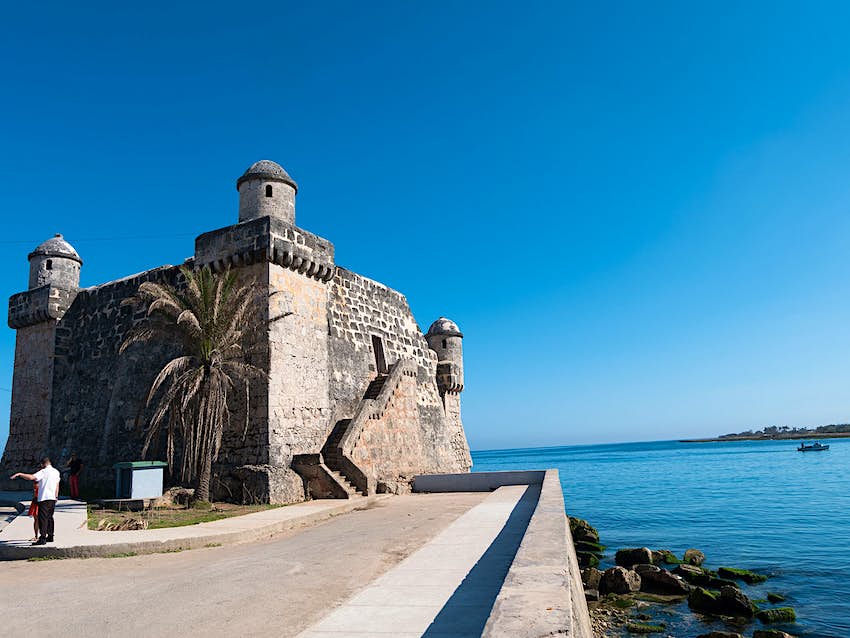 Less than 20 minutes east from Havana’s oldest quarter is the charming fishing village of Cojímar, famous for hosting Ernest Hemingway’s maritime adventures back in the 1940’s and 50’s. Tourist busloads usually stop at Restaurante La Terraza for a daiquiri on the terrace, but more hearty meals and fantastic mojitos are offered at Ajiaco Café . This little town is a slow-paced community, where it's possible to meet locals in a 100% Cuban environment – walk around the malecón (a smaller version of Havana’s iconic promenade) for a glimpse of the natural allure that enchanted Papa 70 years ago.

Lonely Planet Local Tip: For the best pictures of the seaside town, head to the Torreón de Cojímar, a wrecked Spanish fort from the 17th century that was the first to be taken by the British when Havana was attacked in 1762.

Getting there: Yellow cabs from Parque Central or any other part of Old Havana cost around CUC $10 to Cojímar. Old American classics may be more expensive, but the scenic ride is definitely worth it. Agree with the driver on a one-way fare if you consider touring for more than a couple of hours in Cojímar but ask for a round-trip offer if you only want a glimpse of the landmarks.

First published in 2012. Lonely Planet Local Diana Rita Cabrera contributed to the update of this story.

Madagascar is partially reopening to travelers this week

Koalas could end up on the endangered species list in Australia

1 min read • Published about 3 hours ago

Miami vs Miami Beach: a local’s take on two cities…