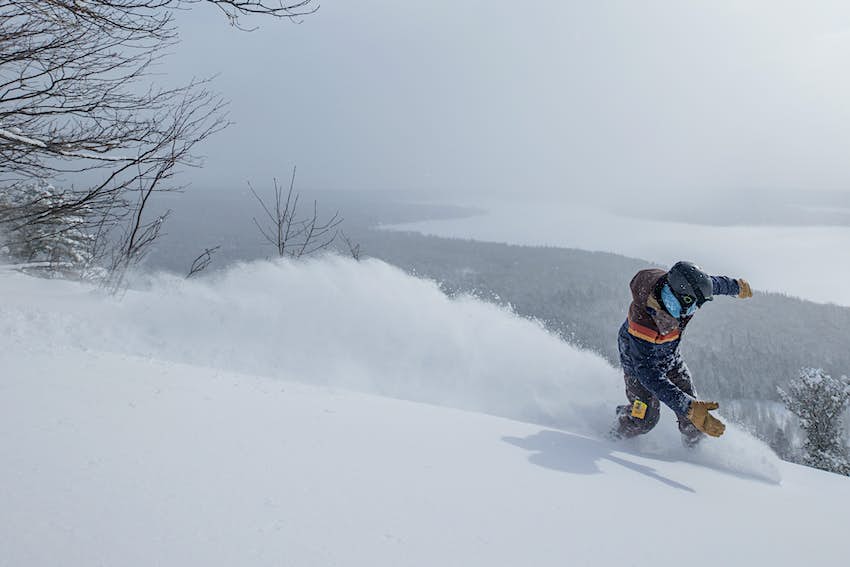 Mount Bohemia may be far from everything, but the runs are steep and the powder is deep and the lack of crowds means fresh tracks all day long © Chris Guibert / Mount Bohemia

You don’t need high-speed quads, massive terrain parks and 4000ft of vert to come into the ski lodge at the end of the day with a smile on your face that nothing can wipe off. Here are five ski areas that you probably haven't heard of but are worth considering for your next adventure.

Vertical drop: 900ft
Acres of skiing: 620
Full-day ticket: $85
Season pass: Starting at $99
Average snowfall: 273 inches
Who skis here: Powder-hound Midwesterners who wish they lived in Colorado, adventure skiers.
What it’s near: Nothing. It’s in the northern part of Michigan’s UP (Upper Peninsula), four and a half hours from Green Bay, Wisconsin.
Best deal: Buy your season pass on the first Saturday in December and it’s $99 for one year, $162 for two years, and $610 for 10 years. Season passes include access to the Mount Bohemia Nordic Spa during the winter ski season.

No grooming, no beginners. That’s essentially Mt. Bohemia’s slogan. Located in Michigan’s UP, Mount Bohemia claims the longest runs in the Midwest, as well as the highest vertical and deepest powder. And no other ski area has challenged that. The mountain caters to advanced and expert skiers and snowboarders who like natural snow and glade skiing through wooded areas. Bohemia claims the most in-bounds glade skiing east of the Rockies in the US after Sugarloaf, Maine.

According to reputable sources, the resort gets 273 inches of snow annually, and it’s high-quality, light and fluffy powder. There’s no shortage of steep, rocky chutes and cliff drops. Even in four days of skiing, you can’t hit it all.

There is a bar in a yurt and another in a log cabin, the restaurant is a yurt, and overnight accommodations are in remarkably affordable cabins or yurts and a hostel. Fill the 13-person yurt, which includes dinner and breakfast, and you and your buddies will be paying $72 per person/night. Don’t think Michigan isn’t known for its cuisine – sample pasties (pronounced past-ies), which are giant empanadas filled with rutabaga, meat, potatoes and spices.

It’s rare to find a town hill smack in the middle of a resort town. Most resort towns are dominated by the monstrous resorts they’re named for, and the towns exist because "the village" was part of the resort plan.

That’s not true of Snow King, which juts out of Jackson Hole downtown proper, a mere six blocks from the famous Jackson Town Square. Founded in 1939, Snow King was the first ski area in Jackson Hole and one of the first in the United States. Ever since snow junkies have been seeking out Snow King for an affordable taste of Jackson powder. Skiing there almost feels like you own a private resort – there's never a line, and there is exceptional terrain whether you like cruiser blues or bumped up gladed steeps. It's a mom and pop area on steroids, a town hill with a hardcore edge. Acre for acre, it's the steepest ski area in the US.

The steepness and the quality of the terrain are Snow King’s greatest surprises. And if you get a season pass you'll be a friend with benefits – free or discounted days at 20 other resorts including Silverton Mountain in southwestern Colorado.

Vert drop: 1400ft
Acres of skiing: 640
Full-day ticket: $50
Average snowfall: 250 inches
Who skis here: hard-working North-Central Montana ranchers
What it’s near: It's in the middle of nowhere. Showdown is 33-miles from the nearest supermarket and White Sulphur Spring, which has a castle and natural hot springs and was once a no-war zone for a half-dozen Indian nations.

Whether you ski in Gore-Tex or Carhartts and a cowboy hat, everyone fits in at Showdown. And no one cares if you like to slide on two planks or one.

Showdown is a family resort, as in the people who ski there consider everyone else who skis there a part of their family. It's Montana’s oldest continually operating ski area – open since 1936 – and it’s as much about the friendly folks who work, live and visit here as the low-moisture, consistent-quality snow. No one is in a rush or too busy to shake hands. The CFO is the owner – he knows most Showdown skiers by name. No one cares about high-speed quads here because Showdown skiers like the slow ones – more time to talk to your neighbor on the lift ride, take in the views and brace yourself against the cold.

Everyone may be so happy and carefree at Showdown because the 6,800ft-high base area means that there is powder from top to bottom – Showdown skiers don't know about ice. The runs are short, but the steep trees are world-class. And you can get Montana grit with a dash of class and a dump of powder for less than $90 for a lift ticket, rental skis, lunch and an après beer. But you'll want to put that beer off ‘til the last chair. Even at the end of the day, there's almost guaranteed to still be untracked powder.

Vert drop: 2494ft
Acres of skiing: 1200
Full-day ticket:  $149 for a SolBright pass on peak days, which gives you access to Solitude and Brighton.
Annual snowfall: 500 inches
Who skis here: Powderhounds with kids.
What it’s near: 15 miles from Salt Lake City
Best deal: The best deal at Solitude is The Inn at Solitude, at times only $99/night. All Solitude lodging gives visitors the 4th night free. Also, you can ski here on the Ikon Pass.

Expert skiers with families, both Utah locals and visitors, flock to Solitude in Big Cottonwood Canyon because there's terrain for everyone. The crowd is more blue-collar than top-1% and there are natural runs, natural fall lines, and natural snowfall over groomed slopes and equally groomed hair. Solitude hasn't bulldozed a single run. It's known for its advanced terrain, but with stellar groomers that are fun for everyone. The slopes are laden with legendary light, fluffy Utah powder. In fact, Solitude claims more powder per person than any other resort.

And there aren’t any crowds. The intimate village is easy in and out, great for locating your kids when you get separated or when it’s time to meet. Skip it if you’re looking for nightlife – free ice skating in the village might be the most action in town. But if skiing is your objective you won’t be disappointed. There’s lots, including lift-served backcountry in Honeycomb Canyon. It’s rugged and wild, and it’ll stay that way. Solitude and Brighton are the only commercial developments allowed in Big Cottonwood by law.

Vert drop: 1200ft
Acres of skiing: 1200 acres; including 130-acre Mirkwood Basin
Full-day ticket: $99
Average snowfall: 252 inches
Who skis here: Employees of other mountains and their families, local free-heelers and residents of Colorado Springs.
What it’s near: Located in Central Colorado, it’s 20 miles from Salida, 40 miles from the Gunnison Airport, 120 miles from Colorado Springs.
Best deal: The Monarch Migration ticket. Show a season pass from anywhere and your day ticket at Monarch is $59.

With a base at 10,790ft, Monarch has one of the highest elevation ranges in North America. It has the second-highest snowfall in Colorado. And that's what skiers have been coming for since Monarch was started as a WPA project 73 years ago – the snow. It's 100% natural – no snowmaking – and Monarch gets about 350 inches each year on its little slice of the Continental Divide.

Bowls, trees and chutes facing in every direction entice experts, but there are plenty of blues and greens for kids and beginners. Plus, it's friendly, off-the-beaten-path and hassle-free – mostly staffed by off-season river guides and fishing guides.

All the beers on tap at Monarch’s Sidewinder Saloon are from breweries in surrounding Chaffin County; demo skis are from Colorado companies, like Icelantic and Fortitude. The Sidewinder also claims the best lunch in Chaffin County.

When you want a little something special, check out Monarch’s cat ski operation, which hauls skiers out into untouched backcountry in the cab of a snowcat. There are no lines, no Summit County crowds, no village, no remote parking, no high-speed quads… just loads of great skiing.

This article was originally published September 2019. It was updated October 2020.

17 best things to do in Edinburgh - Scotland's lively capital city

Five ways to feel like a local in Fiji