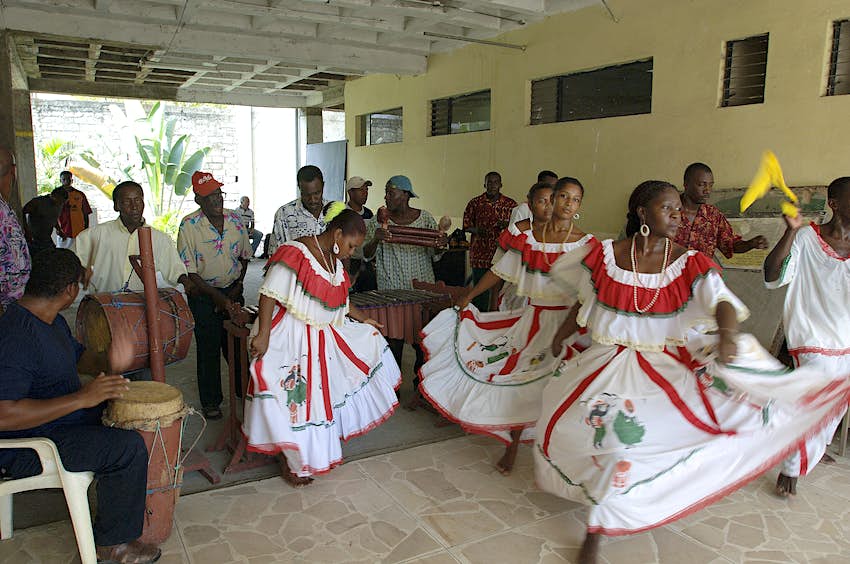 Marimba music, with roots from West Africa, is the most popular genre to emerge from the Esmeraldas region © Maremagnum / Getty Images

Afro-Ecuadorians make up about seven to 10 % of the country's population, but their impact on Ecuador's food, music and traditions is undeniable.

Systemic disadvantages have led to higher rates of poverty and crime, while insufficient infrastructure has kept throngs of tourists from visiting regions with high Afro-Ecuadorian populations. But things are slowly improving thanks to a series of grassroots campaigns that highlight a group of people that have played such a pivotal role in Ecuador's history. Here are three places to explore Afro-Ecuadorian culture.

Editor's note: While the COVID-19 pandemic has disrupted travel plans, we’re continuing to cover the world and all its fascinating cultures in the hope that it will inspire your future travels.

In 1533, 23 enslaved Africans managed to escape a Spanish slave ship that capsized on the Pacific Coast. The group settled in the Esmeraldas province where they established a free community.

The area came to represent a safe haven where enslaved Africans could escape. While free Black colonies gradually rose up in other parts of the country, many of those original settlers remained in the area for generations. Currently, the Esmeraldas province boasts a population that is 70% Afro-Ecuadorian, which is the highest concentration of Afro-Ecuadorians in the country.

“Esmeraldas is the capital of Black culture in the country,” says Gabriel Brito, an Ecuadorian anthropologist who collaborates with the Guayaquil-based NGO Cleotilde Guerrero Foundation. “This is the first area where enslaved Blacks established themselves and where the heart of Afro-Ecuadorian culture remains. Enslaved Africans found in Esmeraldas’ calm beaches and tropical weather an environment that reminded them of their home and combined with the unique features of their surroundings formed a new culture that is now part of Ecuadorian identity.”

Imported from West Africa, marimba music is perhaps the most popular genre to emerge from the Esmeraldas region. The music is played on an instrument of the same name, a palm-wood xylophone with bamboo tube resonators that are accompanied by drums and maracas. The music weaves itself into daily life, acting as a form of oral history that keeps communities connected.

The small towns of San Lorenzo and Borbón are considered a hub for Afro-Ecuadorian marimba music. Borbón is home to Papá Roncón, a popular Afro-Ecuadorian musician whose career elevated marimba music to an international genre. He's the founder of La Catanga, a school of traditional culture in the Esmeraldas province where children are taught to play and dance marimba.

For live marimba shows many head to Las Palmas, a small beach in the city of Esmeraldas with a lively boardwalk. A plethora of Afro-Ecuadorian restaurants can also be found in the area. The Museum and Cultural Center of Esmeraldas contains a wealth of regional archeology that provides insight into Indigenous and Afro-Ecuadorian history.

An ideal time to visit Las Palmas is during the annual Carnaval celebrations when the three-day International Afro Music and Dance Festival occurs. The annual Feast of the Virgin Carmen, patron saint of sailors and the Spanish navy, on July 16, is also celebrated widely throughout the Esmeraldas province. The first Sunday of October marks the National Day of Ecuadorian Blackness, which celebrates freedom from Spanish enslavement.

Around the same time as the Esmeraldas shipwreck, Jesuit priests began bringing enslaved Africans into the Central Highlands to work on their cotton and sugar plantations. Located 1,500 meters (4921ft) above sea level in the Imbabura province, the Chota Valley now represents a unique mix of Indigenous Andean and Afro-Ecuadorian cultures.

The unique Chota Valley Spanish (CVS) is an Afro-Hispanic vernacular and is spoken in several rural villages throughout the Imbabura and Carchi provinces. An estimated 12,000 people speak this dialect.

The Chota Valley is known for its bomba music, which differentiates itself from marimba with more Spanish and Indigenous influences. Ranging from mid-tempo to a very fast rhythm, bomba is usually played with guitars and the Latin American percussion instrument guiro, as well as the bomba, or drum.

Variations of bomba music are played by la banda mocha, or a group of 12 Afro-Ecuadorian farmers who began making music in the 1930s using orange leaves, cigars, bones, sticks and other objects as instruments. None of the members study music, but pass down lessons from generation to generation so when one of the members died, they were replaced by a descendant. Without noise amplifiers or voice accompaniment, these musicians captivate audiences throughout the Chota Valley.

Tourism now represents an important element of the Chota Valley economy and some residents have begun offering extended stays, workshops, farming opportunities, performances, and recreational activities, often centered around Afro-Andean and Afro-Ecuadorian cultures, to attract travelers. “Doña Evita” Community Base for Tourism run by Iliana Carabalí is a great place to start for those interested in organizing trips.

Carnaval is a great time to visit the Chota Valley as celebrations occur throughout the Imbabura province.

In Ecuador’s port city of Guayaquil, most of the Afro-Ecuadorian community lives in Isla Trinitaria, an area that’s considered one of the most dangerous in the city. However, local Afro-Ecuadorians are working to revitalize the neighborhood with projects that provide creative outlets for at-risk youth.

One such foundation is Afromestizo Candente, which was founded 15 years ago by Jimmy Simisterra and seeks to divert young Afro-Ecuadorians from crime, violence and drugs by sharing aspects of Afro-Ecuadorian heritage and helping at-risk youth develop creative talents. Most of Afromestizo Candente’s members are people who left criminal pasts to become artists. The organization hosts marimba shows performed by its members as well as Black culture film festivals.

The Cultural Center Trinitaria run by the Fundación Cleotilde Guerrero also serves as an important hub of Afro-Ecuadorian culture in the city where kids can learn Afro-Ecuadorian music and culture. Another famous site in Isla Trinitaria is Trinibox, a boxing school that rescues young Trinitarians from the streets through the teaching of boxing.

Tourists interested in exploring this area are recommended to do so with a local guide. Luckily, there is a project called Africa Mía run by a group of Afro-Ecuadorian women in Isla Trinitaria that helps to facilitate such trips.

When to go to Ecuador