An insider's guide to driving in Italy

So you're ready to go. You've booked your flight, arranged your accommodation and organised a hire car. Awaiting is a week of motoring through Italy's magical countryside. But what's it really like to drive in Italy? Is it as nerve-wracking as it's made out to be? Do you need the skills of a Formula One driver to cut it on the nation's dog-eat-dog superstrade?

Certainly, driving in Italy's main cities can be a white-knuckle experience but head out to the country and you'll find that the pace slackens and the roads are a lot less stressful. To help you on your way here are some insights based on years of experience and tens of thousands of kilometres.

Italian drivers are fast, aggressive and skilful. Lane hopping and late braking are the norm and it's not uncommon to see cars tailgating at 130km/h. Don't expect people to slow down for you or let you out. Rather, seize the moment. As soon as you see a gap, go for it. Italians expect the unexpected and react swiftly but they're not used to ditherers so whatever you do, do it decisively.

Much driving etiquette is dictated by unwritten rules. Flashing, for example, means 'Get out of the way' or 'Don't pull out 'coz I'm not stopping'. But if an approaching car flashes you, it's warning you that there's a police check ahead. Similarly, the car horn can mean everything from 'Watch out' to 'Ciao' to 'Let's celebrate, the traffic light's just turned green'.

When driving in cities watch out for traffic restrictions. Many city centres are off-limits to unauthorised traffic and if you slip into a ZTL (zona a traffico limitato - reduced traffic zone) you risk being caught on camera and fined. City driving also involves dealing with one-way systems, scooters appearing out of nowhere and narrow streets better suited to horse-drawn chariots than modern cars. To escape the worst mayhem, drive in the early afternoon when traffic is at its lightest and parking is easier. Which brings us to...

Parking is a major headache. Space is at a premium in towns and cities and Italy's traffic wardens are annoyingly efficient. Car parks do exist but they usually fill up quickly, leaving you to park on the streets. If you park between blue lines make sure to get a ticket from the nearest meter (coins only) or tabaccaio (tobacconist) and display it on your dashboard. Note, however, that charges don't apply overnight, typically between 8pm and 8am.

You'll find filling stations all over but smaller ones tend to close between about 1pm and 3.30pm and on Sunday afternoons. This isn't as irritating as it might sound as many have self-service (fai da te) pumps that you can use any time. Simply insert a bank note into the payment machine and press the number of the pump you want. Remembering, of course, to distinguish between benzina (petrol) and gasolio (diesel).

What to carry in the car

Apart from your driving licence, car documents, insurance papers and reflective safety vest, which you're legally obliged to carry, it's worth having some coins for parking meters. Also, if you're travelling with kids, keep some plastic bags to hand. Car sickness is a real possibility on winding country roads and things can prove messy unless you're prepared.

Hiring a car in Italy is easy enough - agencies are widespread and all the usual rules and regulations apply. But bear in mind that a car is generally more hassle than it's worth in cities, so only hire one for the time you'll be out on the open road. Also, think about what kind of car to get. Rural road surfaces are not always the best and many agriturismi and beaches lie at the end of long, axle-busting tracks. Similarly, road signs can be iffy in remote areas, so consider paying for sat nav.

Here are a few roads to try out.

What should you do when you stop driving? Lonely Planet's Italy guide is full of great ideas. 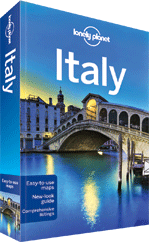