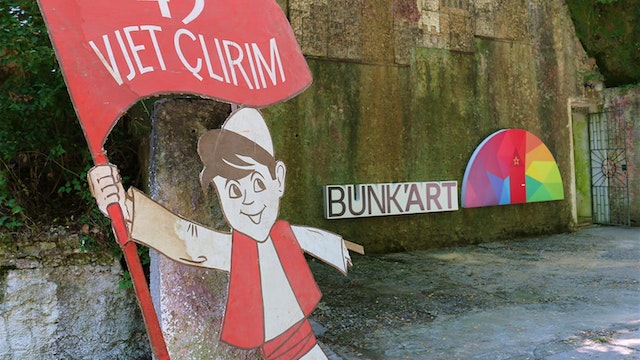 This fantastic conversion – from a massive Cold War bunker on the outskirts of Tirana into a history and contemporary art museum – is Albania's most exciting new sight and easily a Tirana highlight. With almost 3000 sq metres of space underground spread over several floors, the bunker was built for Albania's political elite in the 1970s and remained a secret for much of its existence. Now it hosts exhibits that combine the modern history of Albania with pieces of contemporary art.

Just arriving at the bunker is quite an exciting experience, as you go through a long, dark tunnel in the hillside that leads you to the entrance on the side of a still-active Albanian military base. Once you're inside the bunker itself, you can wander through the furnished rooms intended for the communist elite as they faced the invasion that so terrified them. Elsewhere you'll find a very detailed history of modern Albania, beginning with the 1939 Italian invasion and ending with the overthrow of communism. The display arguably brushes over the true horrors of Hoxha's Stalinist regime, while at least recognising them, are some fascinating documents and photographs, including a video of Enver Hoxha's 1985 state funeral. Other highlights include the enormous Assembly Hall, the main social centre of the bunker, as well as the private chambers of other senior officials.

To get here from the centre of Tirana, take a bus bound for Linza from outside the Palace of Culture on Sheshi Skënderbej, and ask the driver to let you out at Bunk'Art. It's located very close to the Dajti Express, so it makes sense to combine the two within one outing.