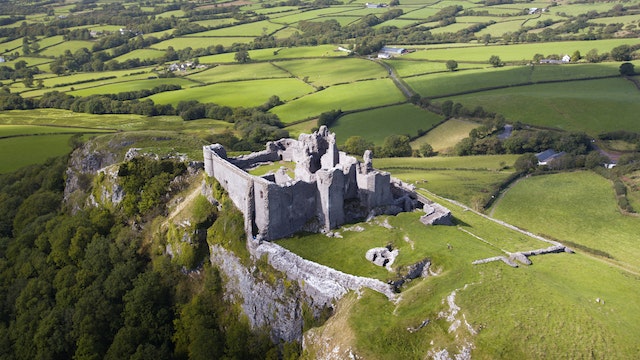 Dramatically perched atop a steep limestone crag, high above the River Cennen, are the brooding ruins of Wales' ultimate romantic castle, visible for miles in every direction. Originally a Welsh castle, the current structure dates back to Edward I's conquest of Wales in the late 13th century. It was partially dismantled in 1462 during the War of the Roses. On a working farm of the same name, Carreg Cennen is well signposted from the A483 heading south from Llandeilo.

The castle's most unusual feature is a stone-vaulted passage running along the top of the sheer southern cliff, which leads down to a long, narrow natural cave; bring a torch or hire one (£1.50) from the ticket office. Next to the ticket office there's also a 12th-century longhouse (a kind of elongated barn in which people lived with their livestock), filled with darting swallows and the ephemera of rural times past.