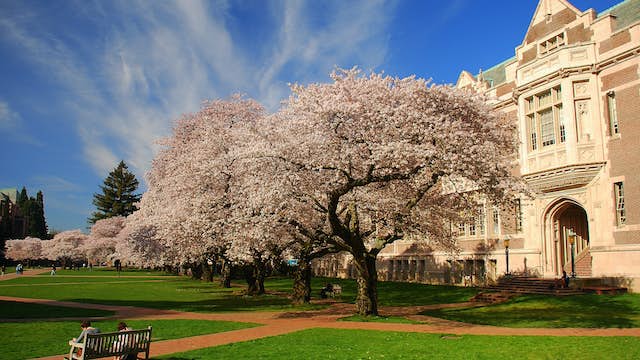 Founded in 1861, Seattle's university is almost as old as the city itself and is highly ranked worldwide (the prestigious Times Higher Education magazine listed it 32nd in the world in 2016). The college was originally located in downtown on a 10-acre site now occupied by the Fifth Avenue Theater (the university still owns the land), but with both university and city outgrowing their initial confines, a new site was sought in 1895.

The present-day 700-acre campus that sits at the edge of Lake Union about 3 miles northeast of downtown is flecked with stately trees and beautiful architecture, and affords wondrous views of Mt Rainier framed by fountains and foliage. Roughly 47,000 students and 22,000 staff enjoy the noble setting, making 'U Dub' easily the largest university in the state. The core of the campus is Central Plaza. Close by you can pick up information and a campus map at the visitor center.

The university is ideal for gentle strolls, people-watching and lung-stretching exercise on the Burke-Gilman Trail. The campus also hosts two decent museums, fine sports facilities, a theater, a library, and a student-union building where leaflet-filled noticeboards advertise the kinds of outré, spontaneous events that typically color student life.