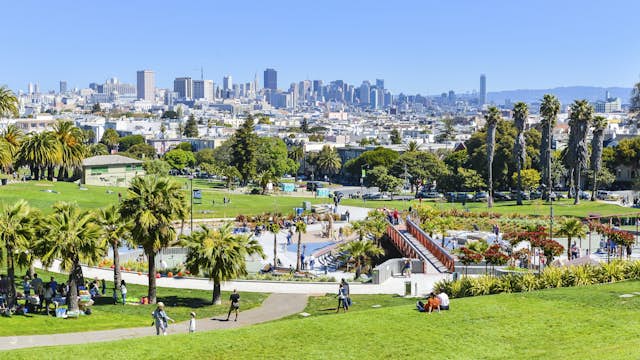 Welcome to San Francisco's sunny side, the land of street ball and Mayan-pyramid playgrounds, semiprofessional tanning and taco picnics. Although the grassy expanses are mostly populated by relaxing hipsters, political protests and other favorite local sports do happen from time to time, and there are free movie nights and mime troupe performances in summer.

Dolores Park certainly has a storied history that demonstrates the diversity and rapidly shifting fortunes, that have defined San Francisco since it was founded. Once the site of an Indigenous Yelamu village called Chutchui, these parcels later were used as a cemetery by two of the oldest Jewish congregations in the United States. The graves were eventually moved elsewhere as the city grew, after which Dolores Park was briefly used as a staging ground by Barnum & Bailey Circus before the land was sold to the city in 1905.

Just a year later, San Francisco's 1906 earthquake and fire violently interrupted park planning, and it remained bumpy, squishy and poorly drained until its 2015 regrading. At the corner of 20th and Church Streets, note the golden fire hydrant: this little fireplug was the Mission's main water source during the 1906 earthquake and fire, and stopped the fire from spreading south of 20th Street.

That's not the only role Mission Dolores Park played in San Francisco's most famous natural disaster. This is where thousands of displaced families lives in temporary shacks and tents while the city was rebuilt. Until the 1920s, what is now a children's playground was a public swimming pool. It was initially built in 1909 in hopes that new amenities might help neighborhood residents forget Dolores Park's years as a refugee camp and reconsider it as a green space for recreation.

Some of the park's other features, however, have had more staying power. There's a statue of Miguel Hildago, a hero of Mexican history who delivered a speech called "The Cry of Dolores" calling for the end of Spanish Colonial rule. The park also features the Mexico Liberty Bell, a gift from the Mexican government in 1966 and a replica of the bell rung in the town of Dolores to rally freedom fighters at the dawn of the Mexican war for independence.

Climb to the upper southwestern corner for superb views of downtown, framed by palm trees. Flat patches further down are generally reserved for soccer games, cultural festivals, candlelight vigils and ultimate Frisbee. Fair warning: secondhand highs copped near the refurbished bathroom may have you chasing the helados (ice-cream) cart, which are nearly as plentiful as the Mission District's dispensaries. Grab a beer at Woods Cervecería at the northwest corner of the park or a bite at the Dolores Park Cafe at the northeast corner before you settle in to enjoy enjoy the people watching.

Dolores Park lies between Dolores Street, Church Street, and 18th & 20th Streets. It's officially open from 6AM to 10PM, and can be accessed via public transit using the 14, 33, and 49 busses, the BL, GN, RD, and YL BART routes, and the J streetcar.