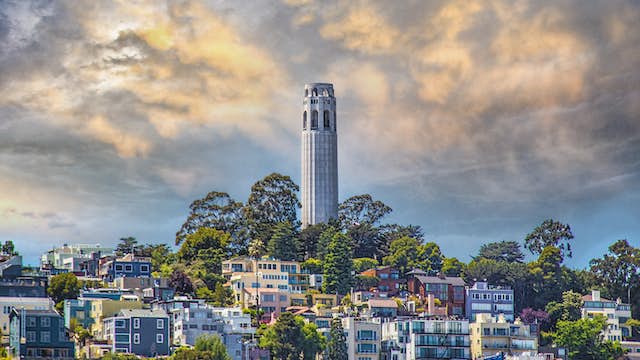 If you want to really see San Francisco, head to Coit Tower, a 1933 art deco beaut designed by Arthur Brown, Jr. and Henry Howard that sits high up on Telegraph Hill. San Fran scribe Gary Kamiya once described Coit Tower as "the best 60-second walk I know," noting that in the minute it takes to circumnavigate Coit's base from the southwest you will see "Chinatown, Nob Hill, Russian Hill, the Golden Gate Bridge, Alcatraz and the Embarcadero, Berkeley, the Bay Bridge and Oakland, Mount Diablo, the South Bay, the Ferry Building, and the entire Financial District, with a piece of Mount San Bruno and Bernal Heights in the Distance."

Phew. Of course, that depends on San Francisco's signature fog not obscuring the view.

Coit Tower may look sleek and graceful from afar, but the truth is it's just as quirky as the rest of San Francisco. The tower was funded by, and named for, philanthropist Lillie Hitchcock Coit. A rich eccentric nicknamed 'Firebelle Lil', Coit had a deep fascination with and appreciation for firefighters ever since she was a teenager. In her will, she set aside funds to beautify San Francisco, which the city used to build a memorial to firefighters in Washington Square Park as well as Coit Tower.

A year after the tower was completed, the Public Works of Art Project (part of President Roosevelt’s New Deal) added a series of murals celebrating California workers. 25 local artists were selected, including Bernard Zakheim, Clifford Wight, Victor Arnautoff and John Langley Howard. The later four shared an admiration of Diego Rivera, whose Allegory of California Fresco in San Francisco was a point of hometown pride. Indeed, Rivera himself had trained Arnautoff – an intellectual and artistic affinity that perhaps makes what happened next less of a surprise.

In a mixup that has since taken on a life of its own in local legend, several of the completed murals became lightening rods of controversy when the public noticed that communist party symbols, Marxist slogans, and IWW mottos appeared in their backgrounds. Throw in a strike of longshoresmen and Teamsters that coincidentally occurred around the same time, and a hefty dose of moral panic, the public became convinced that Coit Tower was awash in anti-capitalist propaganda. It caused such a stir that Coit Tower was closed down for several months and two of the murals were amended.

The Tower's reputation did bounce back eventually and today it's one of best-beloved San Francisco landmarks. It's appeared in numerous movies and TV shows, including Alfred Hitchcock's 1958 love letter to San Francisco, Vertigo; 1971 Clint Eastwood film Dirty Harry; and Amazon Prime's prestige series The Man in the High Castle. Indeed, there's a bit of an urban legends that asserts Hitchcock insisted including the Coit Tower in Vertigo because he was a distant relation of Firebelle Lil – though it's ultimately just a myth.

How to visit Coit Tower

To reach Coit Tower take Muni bus 39 from Fisherman’s Wharf. Alternately, you can hike up the famous Filbert Street Steps and say hello to Telegraph Hill's resident parrots along the way. It's free to take Kamiya's advice and stroll around the tower's base, but to ride the elevator to the top will cost you a small fee.

There are different rates for locals and visitors, with adult tickets varying between $7 and $9, respectively. Seniors over 62 and teens ages 12-17 are $4 and $6 depending on residency. Children from 5-11 are $2 and $3. Visitors may also book a docent-led mural tour which costs $8 and lasts thirty to forty minutes. You'll have a chance to learn more about the murals, as well as the Public Works of Art Project and the 25 local artists themselves.