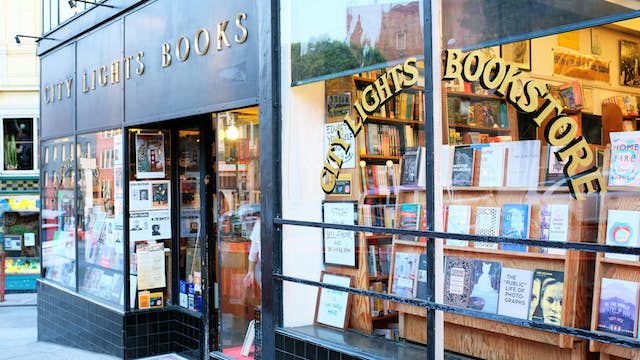 No one could have predicted the cultural force City Lights would become when it first opened in 1953. Sure, it had a proletarian ethos suggested by its founders decision to name the shop for a Charlie Chaplin film and sell only paperback books. And its initial owner, professor Peter Martin, certainly had an impeccable pedigree for the blend of publishing and progressive politics that would establish City Lights as an opponent of censorship and bastion of free speech.

Martin was the son of Carlo Tresca, an Italian anarchist and publisher of socialist newspapers who married the sister of American Civil Liberties Union founder Elizabeth Gurley Flynn. But even after Martin was joined as co-owner by poet Lawrence Ferlinghetti and book-clerk-cum-manager Shigeyoshi Murao, the shop easily could have remained a quiet mainstay of the North Beach beat scene.

That changed in 1955 when Martin sold his shares and moved back to New York City, where his father had been assassinated ten years earlier. Left to his own devices, Ferlinghetti decided to start a small press called City Lights Publishing that would produce the Pocket Poets Series, featuring some of Ferlinghetti's own work and that of other beatnicks who read at open mic nights hosted by venues like the now-defunct Six Gallery. One of those new voices was a twenty eight year old poet named Allen Ginsberg, whose epic poem Howl got both Ferlinghetti and Murao arrested for printing and selling obscene materials.

The ensuing trial and landmark 1957 ruling in favor of free speech put the beats, and City Lights, on the national map – quite literally. Soon tourists began popping by, eager to experience San Francisco's burgeoning new counterculture movement for themselves. Over time, City Lights continued to published writers who pushed the envelope of political and philosophic thought and literary form, including titles by Angela Davis, Diane di Prima, Frank O'Hara, and Noam Chomsky, proving the point on one of Ferlinghetti's hand-lettered signs: 'Printer's Ink Is the Greater Explosive.'

City Lights also steadily took over space in its funny triangular building as neighboring businesses moved out, expanding into a cellar that was once the lair of the paper dragon used in Chinatown's Lunar New Year celebrations, and where enigmatic slogans on the walls like 'I am the door' were left behind by a cult that worshipped here in the 1930s. That cellar became one of City Lights' themed rooms, and home to nonfiction tomes unconventionally organized by book buyer Paul Yamazaki according to counter-cultural themes like Stolen Continents, Muckraking, and Commodity Aesthetics. Feel free to enjoy some idle browsing, a past time highly encouraged at City Lights – indeed, another of Ferlinghetti's signs describes City Lights as 'A Kind of Library Where Books Are Sold.'

Visitors from around the world recognize the truth of this statement: City Lights remains a door to new ideas and continuing revelations. Though Ferlinghetti passed away in late February of 2021 at the age of 101, the publishing arm of the business he built continues to give paper and platform to writers often shut out of traditional publishing, including Latinx and Chicanx voices, LGBTQIA+ authors, and death row inmates.

So come by, load up on zines on the mezzanine, entertain radical ideas downstairs in the new Pedagogies of Resistance section, and curl up in the designated Poet’s Chair upstairs overlooking Vesuvio Cafe, where Ferlinghetti and Murao once held court with contemporaries like Jack Kerouac, Dylan Thomas, and Bob Dylan. For almost seventy years now, this San Francisco treasure has truly been a place where, as Ferlinghetti put it, the public is "invited, in person and in books, to participate in that 'great conversation' between authors of all ages, ancient and modern."

How to visit City Lights Booksellers

City Lights is open seven days a week from 10 AM to midnight. It can be reached on the 8X or the 41 Union buses to Columbus & Broadway, or via the 30 Stockton or 45 Union/Stockton buses to Stockton & Broadway. The nearest Muni stop is Montgomery Station. Metered street parking is available nearby, while there are parking garages near Portsmouth Square and at 735 Valejo. Further across the border into Chinatown, Good Luck Parking Garage is a fun option to try.

The bookshop also hosts weekly author readings – though the rotation has been taken online due to the COVID-19 pandemic. check City Light's social media accounts on Instagram, Facebook, and Twitter for regular updates as to what digital readings are happening and when in-person events are back on.