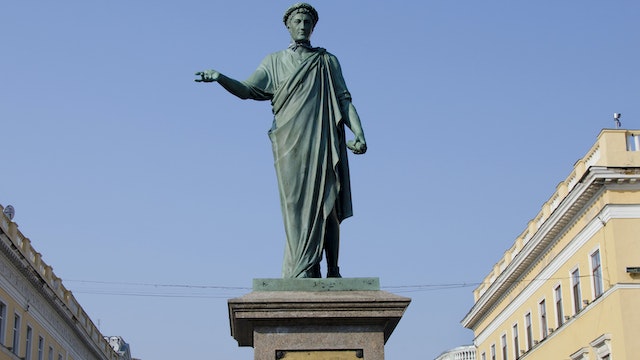 The city's bay-facing showcase greets seafarers with an array of whitewashed colonnaded buildings. Fresh from a Russian-funded spruce-up, the boulevard is also a pleasant place to walk or hide from the scorching sun in the shade of trees. It begins at Grafskaya Pristan (Графская пристань; Count's Jetty) – the city's official gateway marked by a colonnaded arch. Here you can hop on a bay cruise (50uah, 1½ hours). The square behind is dominated by the Admiral Nakhimov monument (Памятник адмиралу Нахимову; 1959), dedicated to the man who led the city's defence during the Crimean War. Walking further along the seafront, you will soon spot the Eagle Column (Памятник затопленным кораблям; 1904). Set atop a rock in the sea, it commemorates Russian ships deliberately scuppered at the mouth of the harbour in 1854 to make it impossible for enemy ships to pass. The boulevard ends at Artbukhta (Artillery Quay) – the city's main nightlife area.