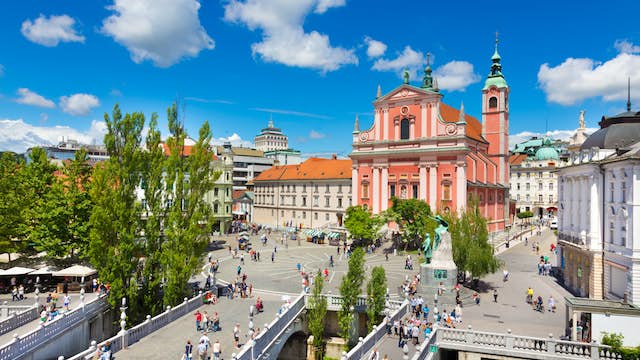 The centrepiece of Ljubljana's wonderful architectural aesthetic is this marvellous square, a public space of understated elegance that serves not only as the link between the Center district and the Old Town but also as the city's favourite meeting point. Taking pride of place is the Prešeren monument (1905), erected in honour of Slovenia’s greatest poet, France Prešeren (1800–49).

Immediately south of the statue is the city's architectural poster-child, the small but much acclaimed Triple Bridge. To the east of the monument, at No 5 is the Italianate Central Pharmacy, an erstwhile cafe frequented by intellectuals in the 19th century. To the north sits the Franciscan Church of the Annunciation, and on the corner of Trubarjeva cesta and Miklošičeva cesta, the delightful secessionist Palača Urbanc building (1903), which now houses a fancy department store. Diagonally across the square at No 1 is another secessionist gem: the Hauptmann House. Two doors down at Wolfova ulica 4 you’ll see a terracotta figure peeking out from a window. The figure is Julija Primič, a love interest of Prešeren's, though the union was apparently never consummated.