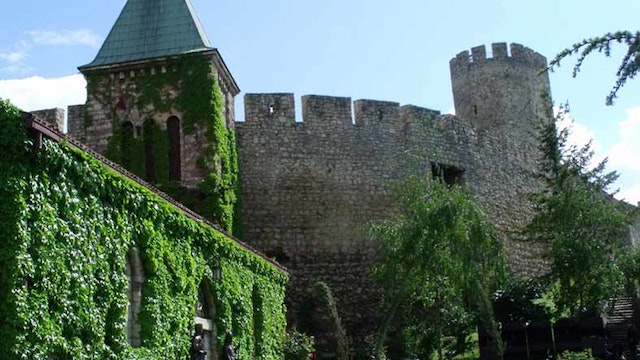 Some 115 battles have been fought over imposing, impressive Belgrade Fortress (aka Kalemegdan); the citadel was destroyed more than 40 times throughout the centuries. Fortifications began in Celtic times, and the Romans extended it onto the flood plains during the settlement of 'Singidunum', Belgrade's Roman name. Much of what stands today is the product of 18th-century Austro-Hungarian and Turkish reconstructions. The fort's bloody history, discernible despite today's jolly cafes and funfairs, only makes the fortress all the more fascinating.

Entering from Knez Mihailova and passing through Kalemegdan Park, you first reach the Upper Town whose attractions include the Military Museum, Clock Tower, Damad Ali-Paša's Turbeh, Roman Well and Victor Monument. In the Lower Town, which slopes down towards the river, look out for the Big Gunpowder Magazine, Ružica and Sveta Petka Churches, Old Turkish Bath (Hamam) and Nebojša Tower.

Audio guides in six languages with a map (300RSD; plus ID as deposit) are available from the souvenir shop within the Inner Stambol Gate, which is also where you must purchase tickets for the Clock Tower, Roman Well and Big Gunpowder Magazine.