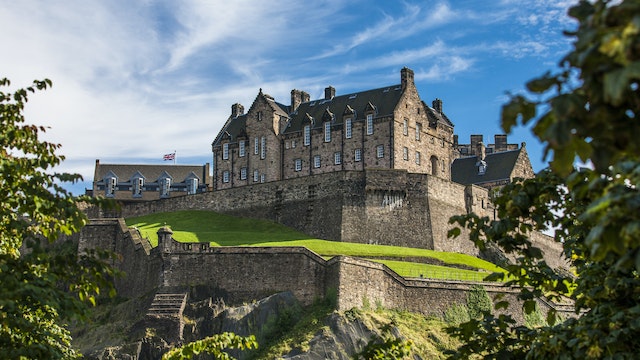 Edinburgh Castle has played a pivotal role in Scottish history, both as a royal residence – King Malcolm Canmore (r 1058–93) and Queen Margaret first made their home here in the 11th century – and as a military stronghold. The castle last saw military action in 1745; from then until the 1920s it served as the British army's main base in Scotland. Today it is one of Scotland's most atmospheric and popular tourist attractions.

The brooding, black crags of Castle Rock, rising above the western end of Princes St, are the very reason for Edinburgh's existence. This rocky hill was the most easily defended hilltop on the invasion route between England and central Scotland, a route followed by countless armies from the Roman legions of the 1st and 2nd centuries AD to the Jacobite troops of Bonnie Prince Charlie in 1745.

The castle's Esplanade is a parade ground dating from 1820, with superb views south over the city towards the Pentland Hills. At its western end is the Entrance Gateway, dating from 1888 and flanked by statues of Robert the Bruce and William Wallace. Above the gate is the Royal Standard of Scotland – a red lion rampant on a gold field – and the Scottish royal motto in Latin, "Nemo me impune lacessit" ("no one provokes me with impunity").

The One O'Clock Gun

Inside the entrance a cobbled lane leads up beneath the 16th-century Portcullis Gate, topped by the 19th-century Argyle Tower, and past the cannon of the Argyle and Mills Mount Batteries. The battlements here have great views over the New Town to the Firth of Forth. At the far end of Mills Mount Battery is the One O'Clock Gun, a gleaming WWII 25-pounder that fires an ear-splitting time signal at 1pm every day (except Sunday, Christmas Day and Good Friday).

South of Mills Mount the road curls up leftward through Foog's Gate to the highest part of Castle Rock, crowned by the tiny St Margaret's Chapel, the oldest surviving building in Edinburgh. It's a simple Romanesque structure that was probably built by David I or Alexander I in memory of their mother, Queen Margaret, sometime around 1130 (she was canonized in 1250). Following Cromwell's capture of the castle in 1650 it was used to store ammunition until it was restored at the order of Queen Victoria; it was rededicated in 1934. The tiny stained-glass windows – depicting Margaret, St Andrew, St Columba, St Ninian and William Wallace – date from the 1920s.

Immediately north of St Margaret's Chapel is Mons Meg, a giant 15th-century siege gun built at Mons in Belgium in 1449. The gun was last fired in 1681, as a birthday salute for the future James VII/II, when its barrel burst. Take a peek over the wall to the north of the chapel and you'll see a charming little garden that was used as a pet cemetery for officers' dogs.

The main group of buildings on the summit of Castle Rock are ranged around Crown Sq, dominated by the shrine of the Scottish National War Memorial. Opposite is the Great Hall, built for James IV (r 1488–1513) as a ceremonial hall and used as a meeting place for the Scottish Parliament until 1639. Its most remarkable feature is the original 16th-century hammer-beam roof.

The Castle Vaults beneath the Great Hall (entered on the west side of Crown Square) were used variously as storerooms, bakeries and prisons. The vaults have been restored to how they were in the 18th and early 19th centuries, when they were used as a prison for soldiers captured during the American War of Independence and the Napoleonic Wars. Original graffiti carved by French and American prisoners can be seen on the ancient wooden doors.

The Royal Palace, built during the 15th and 16th centuries, houses a series of historical tableaux leading to the highlight of the castle: a strongroom housing the Honours of Scotland (the Scottish crown jewels), among the oldest surviving crown jewels in Europe. Locked away in a chest following the Act of Union in 1707, the crown (made in 1540 from the gold of Robert the Bruce's 14th-century coronet), sword and sceptre lay forgotten until they were unearthed at the instigation of novelist Sir Walter Scott in 1818. Also on display here is the Stone of Destiny.

Among the neighboring Royal Apartments is the bedchamber where Mary, Queen of Scots, gave birth to her son James VI, who was to unite the crowns of Scotland and England in 1603.

The castle operates a timed ticket system, and all visits must be booked online in advance. You can only enter the site within the timeframe outlined on your ticket, but you may stay as long as you like up to closing time. Children under 5 can visit for free.