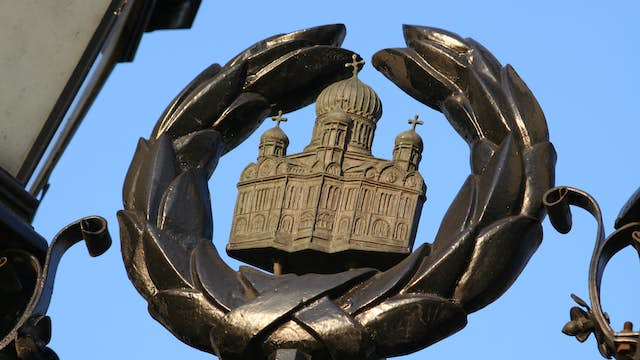 The Archangel Cathedral at the southeastern corner of Sobornaya pl was for centuries the coronation, wedding and burial church of tsars. It was built by Ivan Kalita in 1333 to commemorate the end of the great famine, and dedicated to Archangel Michael, guardian of the Moscow princes. It contains the tombs of almost all of Muscovy's rulers from the 14th to the 17th century.

By the early 16th century the Archangel Cathedral fell into disrepair and was rebuilt between 1505 and 1508 by the Italian architect Alevisio Novi. Like the nearby Assumption Cathedral, it has five domes and is essentially Byzantine-Russian in style. However, the exterior has many Venetian Renaissance features, notably the distinctive scallop-shell gables and porticoes.

The tombs of all Muscovy's rulers from the 1320s to the 1690s are here. The only absentee is Boris Godunov, whose body was taken out of the grave on the order of a False Dmitry and buried at Sergiev Posad in 1606. The bodies are buried underground, beneath the 17th-century sarcophagi and 19th-century copper covers. Tsarevich Dmitry, a son of Ivan the Terrible who died mysteriously in 1591, lies beneath a painted stone canopy.

It was Dmitry's death that sparked the appearance of a string of impersonators, known as False Dmitrys, during the Time of Troubles. Ivan's own tomb is out of sight behind the iconostasis, along with those of his other sons: Ivan (whom he killed) and Fyodor (who succeeded him). From Peter the Great onwards, emperors and empresses were buried in St Petersburg; the exception was Peter II, who died in Moscow in 1730 and is here.

The 17th-century murals were uncovered during restorations in the 1950s. The south wall depicts many of those buried here; on the pillars are some of their predecessors, including Andrei Bogolyubsky, Prince Daniil and his father, Alexander Nevsky.