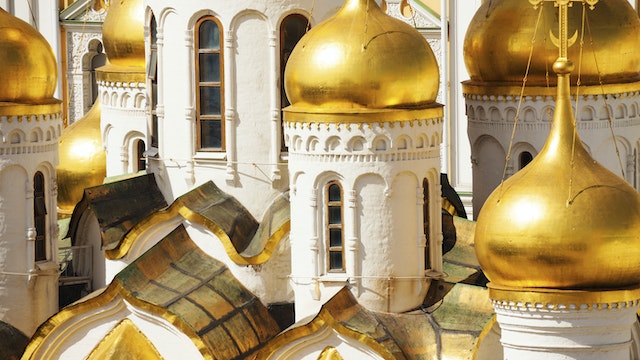 The Annunciation Cathedral, at the southwest corner of Sobornaya pl, contains impressive murals in the gallery and an archaeology exhibit in the basement. The central chapel contains the celebrated icons of master painters Theophanes the Greek and Andrei Rublyov.

Many of the murals in the gallery date from the 1560s. Among them are the Capture of Jericho in the porch, Jonah and the Whale in the northern arm of the gallery, and the Tree of Jesus on its ceiling. Other murals feature ancient philosophers Aristotle, Plutarch, Plato, Socrates and others holding scrolls with their own wise words.

The small central part of the cathedral has a lovely jasper floor. The 16th-century frescoes include Russian princes on the north pillar and Byzantine emperors on the south, both with Apocalypse scenes above them.

But the chapel's real treasure is the iconostasis, where restorers in the 1920s uncovered early 15th-century icons by three of the greatest medieval Russian artists. Theophanes likely painted the six icons at the right-hand end of the deesis row, the biggest of the six tiers of the iconostasis. Andrei Rublyov is reckoned to be the artist of most of the paintings at the left end of the festival row – above the deesis row – while the seven at the right-hand end are attributed to Prokhor of Gorodets.

The basement – which remains from the previous 14th-century cathedral on this site – contains a fascinating exhibit on the archaeology of the Kremlin. The artefacts date from the 12th to 14th centuries, showing the growth of Moscow during this period.